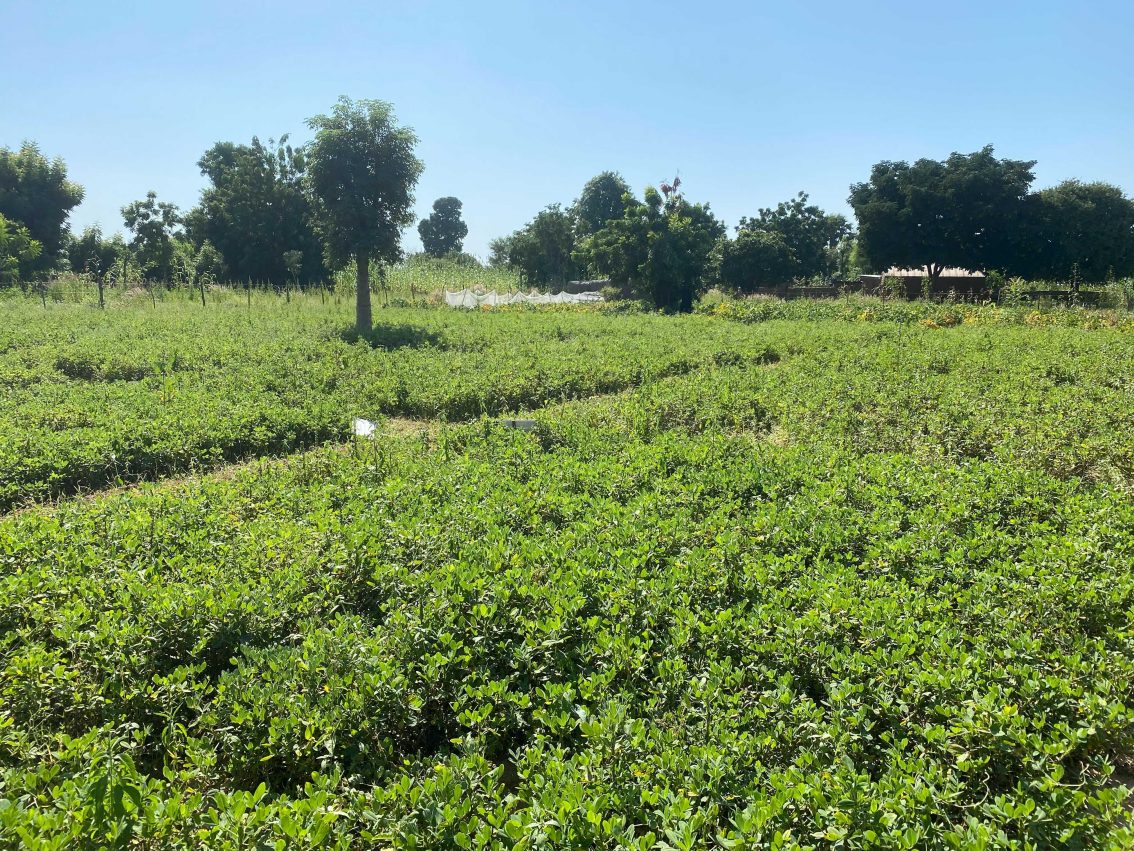 It’s harvest time in northern Adamawa State. During this time of year, farmers are busy. Farmers have intricately planned harvest and post-harvest activities, such as drying and threshing (removing the grain from the plant). Plans follow a series of steps to ensure that crops are harvested on time and then kept safe from the weather, insects, molds, as well as thieves and wandering cattle herds.

The first major crops to be harvested are maize–better known as corn in the U.S.–and rice. Next, comes groundnuts (peanuts), which serve as both a staple of the diet in northern Nigeria and a key crop for the oil it produces. Farmers harvest soybean next. And the last major crops of the season are cowpeas and guinea corn (grain sorghum), which are an essential food crop in this region.

This year was a hard year for farmers. The rains came late, and though the area also had flooding at the height of the rainy season, the total rainfall was insufficient. Farmers pinned hopes on a final rain to come before harvesting of groundnuts had to start, but rainfall proved elusive. Residents feel the effects of climate change acutely in this region, as such irregularities become more frequent.

Without that end-of-season rain, the ground hardens, making it difficult to harvest groundnuts from under the Sudan and Sahel savannah soils of northern Adamawa. But if left in the ground for too long, the groundnuts may break off in the ground and not be harvested. Delayed harvesting also makes them more susceptible to fungal diseases, which can be very harmful to health and reduce marketability. Furthermore, it can cause withering of the kernel during the drying process. To harvest in the hardened soil, farmers have to carry water to their fields to artificially moisten the ground. Then, they use hoes to loosen the soil and dig up the groundnuts. Farmers take this approach instead of pulling the plant with their hands, which is the traditional practice. In an already busy season, this added work for a smaller harvest serves as an unwelcome stressor.

Though harvests may not be what we hoped this year for groundnuts, Nuru’s women farmers may do better than others because of their participation in Nuru’s crop loan package. The farmers used an improved variety of groundnut seeds, the application of fertilizer, fungicide and inoculant, and adherence to Good Agricultural Practices. The improved groundnut package looks to be yielding a better crop than the traditional variety. “Nuru taught us to plow first and create ridges in the soil, and how to apply fertilizer before planting,” a woman farmer from the Happy Farmers Association said. Nuru’s demonstration plots in each village help show the results of using the crop loan package.

Soybean tells a similar story of the impact of using better seeds and improved practices, even during a drought year. Soy is not as common amongst the farms of northern Adamawa. But the plant presents a fast-growing market in Nigeria and indeed all of West Africa. This is largely due to the demand for cooking oil and livestock feed to supply a burgeoning poultry industry. Soybean harvest from the Nuru Nigeria demonstration plots showed a significant increase in yields from the improved variety to the traditional variety.

We will not know the full harvest amounts for some time still. As part of the intricate process of harvesting all crops over the period of only a couple of months, groundnut pods first get dried in the field. Farmers let them dry while the pods are still on the plant. Then, they remove the pods from the plant and dried in the sun. From here, farmers store groundnuts in their shells until after the December holiday season.

In addition to the Christmas holiday for Christian families, December is the most common time for weddings in Nigeria. This is a time when farmers can use their recent harvests to pay for elaborate celebrations. Farmers sell some groundnuts, along with other crops, during this period to fund the festivities. However, most groundnuts are stored until January or February. At this time, with harvest finally finished and celebrations complete, farmers gather under trees to shell groundnuts by hand.

For soybean, the harvest will be complete before the holidays, but it too will be stored for later sale, after being dried and threshed. Because of its growing market demand, soybean can be expected to fetch a good price. “Nuru helped us achieve our aims,” said a male farmer who had taken the soybean loan package this year. Nuru helped through the input package, training on proper use, and through extension services provided when farmers faced challenges in the field, such as insect damage. With a smile, the farmer added, “They do us great help; I am thanking them for their assistance.”

With support from Nuru Nigeria, the farmers enrolled in Nuru farmer associations are on the path to greater resilience even in difficult years like this one.

Impact & Programs Specialist, Nigeria — Growing up on a dairy farm in Kansas, agriculture has been central to Dena’s life and work. She holds M.S. degrees in agricultural and resource economics and international agricultural development from the University of California, Davis, as well as a B.S. in agricultural communications and a B.A. in political science from Kansas State University. Before joining Nuru, Dena worked to build agricultural capacity on three continents with the Post-Harvest Loss Innovation Lab at Kansas State University and in Afghanistan while working for the USDA. She is also pursuing a PhD in security studies, further researching intervention points to break the cycle of conflict and poverty through agricultural economic growth.