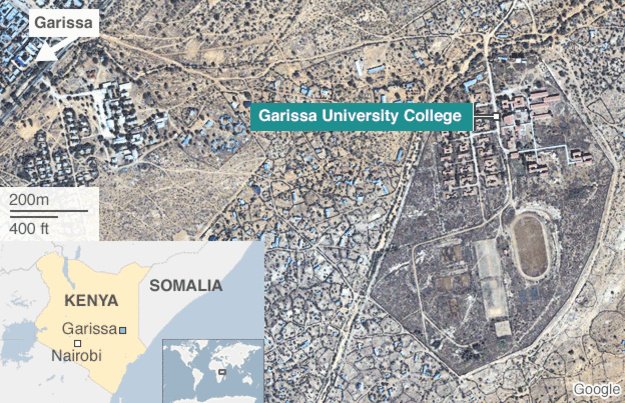 Al Shabaab, a Somalia-based movement known for terrorism and violence against non-Muslims, carried out a well-planned, heinous attack on Garissa University the morning of Thursday, April 2, 2015. This same group was behind the multiday Westgate shopping mall attack in Nairobi in September 2013.

“This ruthless act is humanity at its worst,” says CEO Jake Harriman. “Targeting students in higher education is a direct attack on the future of the nation. This is a sad day for all of us, and Nuru International remains committed to stand with our brothers and sisters in Kenya.”

While the attack reinforces that Kenya is a popular target for terrorist groups, Kenyan security forces are actively working to deter the threat. The fact that the attack was so far outside the city center indicates that threat groups are having a hard time working in Nairobi proper.

Nuru International teams are safe and there is no immediate threat to its partner communities, which are located more than 400 miles away from Garissa. Nuru will continue to monitor the security situation in all countries where its staff is present in order to keep everyone apprised of emerging threats and to ensure the safety of all personnel.

Security Director — Brian graduated from Boston College with a Bachelor of Arts in Philosophy and served in the Marine Corps for 15 years as an infantry officer where he had the opportunity to work for a variety of infantry, reconnaissance, and special operations units during multiple combat deployments to Iraq and Afghanistan. After leaving the Marine Corps, Brian graduated UCLA’s Executive MBA program and is currently enrolled in UC Berkeley’s Masters in Information and Cybersecurity program. He is committed to protecting Nuru’s impact on communities overseas. Brian is an avid traveler and loves spending his free time outdoors.