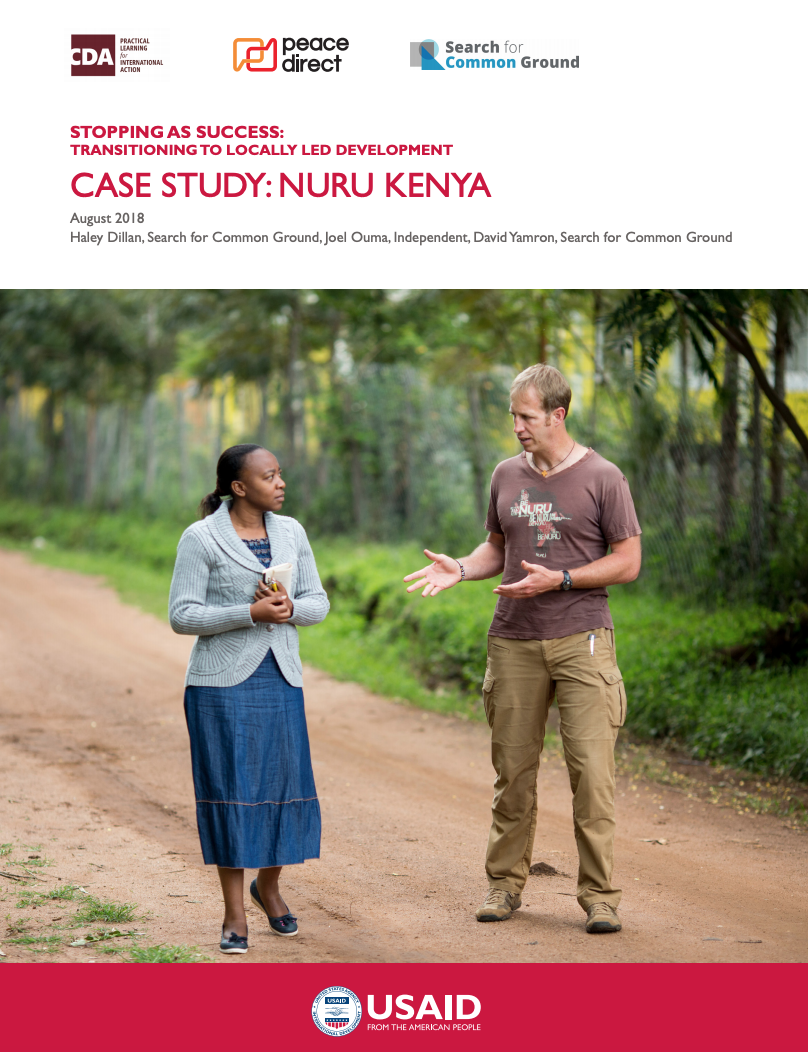 The 2015 exit of Nuru International staff from Migori County, Kenya, was recently featured as a case study in the USAID-funded collaborative research project, “Stopping As Success: Transitioning to Locally Led Development” (SAS), a project aimed at promoting “locally led development by bringing greater awareness to the international community of the multiple dynamics at play when ending a development program and to provide practical guidelines and resources.” SAS consortium members, Peace Direct, Search for Common Ground, and CDA Collaborative Learning, fueled by their own global experiences and desire to see locally led development and ownership models, reviewed 20 case studies of INGO transitions.

The case study unpacks the history of Nuru Kenya, starting with its co-creation launched in 2008, which entailed promoting agency by removing barriers from local change agents, sustaining opportunity agents to ensure local change agents are engaged in critical thinking, feedback, and debate, and equipping local change agents to manage projects and make all decisions for the local organization. Because meaningful local ownership is paramount to the Nuru model, local capacity development was built into the programming to ensure future sustainability of the project, which included successful exit of all Nuru International staff from Kenya.

The turnover of Nuru Kenya operations to the local team was planned from the beginning, with a focus on three transition drivers: achievement of key program impact milestones, the level of capacity reached by the Kenyan team, and a strong local Country Director capable of leading the organization into the future. The final exit and transition was a gradual process that demanded rigorous planning, ongoing feedback, and transparent communications. Former Nuru International Field Operations Director, Amy Sherwood, and Nuru Kenya Country Director, Pauline Wambeti further reflect on the 2015 exit in this blog, noting that “Nuru’s exit strategy prioritizes relationships based on mutual trust, understanding, and respect as a way to develop and reach common goals.”

Despite being well prepared for full turnover to the local team, Nuru Kenya faced challenges. Though Kenyan, Nuru Kenya’s Country Director is not from the local Kurian community. Additionally, as a Kenyan woman, Pauline faced unique challenges. To mitigate these, Pauline established quarterly meetings with local chiefs, where she welcomed feedback about Nuru programming and continuously worked to build trust with community members.

“We will continue communicating; we have this post-exit relationship plan nailed down, which was communicated from the board to the team to the community. [Nuru International and Nuru Kenya leadership] had ‘high touch’ … meetings just immediately after [exit]. Weekly, then they tapered off to biweekly, then monthly, and now not everyone needs to talk to [Nuru International leadership]. Now there are just a few people who are talking with the [US-based international] team. So that was quite a good plan. It was phased so that we could also be cushioned from that shock of their departure. We had done the strategic planning together. Everybody was sold on the new things that needed to happen. So, we were not left without a clear vision of what needs to happen.  -Pauline Wambeti, Nuru Kenya Director

Additionally, Nuru Kenya was faced with the community misconception that the exit of Nuru International staff indicated the collapse of Nuru Kenya. This misconception generated from poor communication on the part of Nuru International and Nuru Kenya, as well as prior experiences of the community in witnessing the closure of internationally-led nonprofits when expatriate staff leave the country. It was imperative for the local team to combat these misunderstandings while continuing to empower Kenyan staff in their leadership roles.

One of the greatest challenges came when Nuru Kenya realized it needed to restructure. Nuru Kenya chose to shift its operational model from direct extension services to the cooperative system, and with that, fewer staff members were needed. This change took place alongside a restructuring of the board, where Pauline Wambeti brought in the experts needed to speak into the vision of Nuru Kenya. Ultimately, these changes laid the groundwork for innovative achievements; however, the growing pains were difficult.

“It is not a stretch to call Nuru a singular case – it is rare to find an organization so single-mindedly focused on long-term sustainability, so focused on inclusive community collaboration, and so disengaged from the project-driven cycles that often define contemporary development. There is much that the development community, including donors, implementers, and local CSOs, can learn from Nuru’s experience.” – Stopping As Success

The SAS research found that Nuru’s organizational set-up–locally-led development supported by Nuru International in an advisory role post-exit–helped set the stage for deeply impactful work beyond the exit. Amy Sherwood noted that, “Pauline and her team have continued to innovate to improve outcomes and overcome challenges. Many of the most meaningful changes to Nuru’s approach have occurred in the years after the exit, for example, shifting to a more community-owned cooperative model and rolling out a comprehensive ‘feed to market’ dairy program to accompany farmers throughout the transition from subsistence to business.”

The summary of this full-length case study can be viewed here.