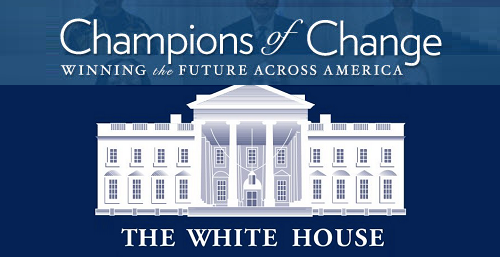 Recently, Nuru’s CEO Jake Harriman was nominated to participate in the White House Champions of Change program. Through this program, The White House recognizes everyday Americans who are doing extraordinary things to empower and inspire members of their communities. This particular Champions of Change event will honor veterans who exemplify entrepreneurship. It will also provide others looking to start and grow a business the opportunity to learn from top veteran business leaders and investors. The Champions have distinguished themselves by continuing to serve our country through their successful small businesses and non-profits that create jobs, spur economic growth, and help their communities.

As an honoree, Jake will have the opportunity to talk on a panel about Nuru and the challenges and opportunities he has encountered. In conjunction with the event, a brief version of his bio and a blog post will also be featured on the White House website. The program will feature remarks by Dr. Jill Biden and will also feature Daymond John, Kevin O’Leary, and Robert Herjavec, from ABC’s Emmy Award-winning TV show Shark Tank.

The event will be live streamed on the White House website starting at 1PM EDT Wednesday August 27th.