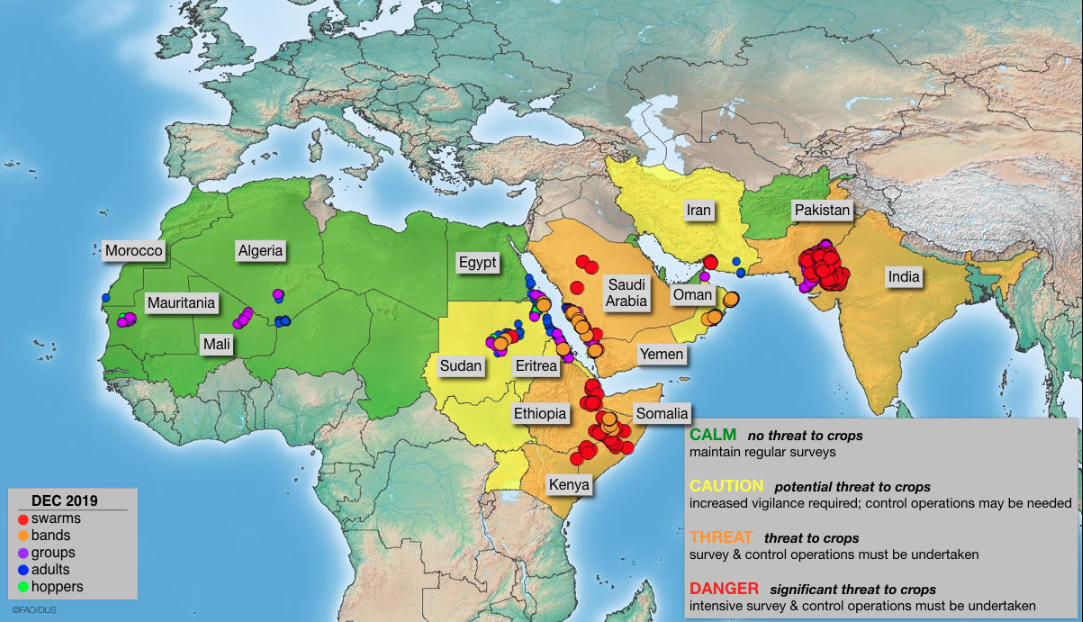 Desert Locusts: How will farmers be impacted?

The most expansive outbreak of desert locusts in decades is currently migrating across the Horn of Africa and reaching north into South Sudan and south into Tanzania. Massive desert locust swarms have occurred in 1926-34, 1940-48, 1949-63, 1967-69 and 1986-89 and in some cases have been transcontinental in nature. However, this outbreak is the largest since 1986-1989 in Ethiopia and Somalia, and the most severe in Kenya since 1950 (FAO).

A desert locust lives a total of about three to five months (longer at times of ideal conditions), and as an adult consumes roughly its own weight in green vegetation per day. For perspective, a desert locust swarm the size of New York City eats the same volume of food as the entire population of New York (state), Pennsylvania and New Jersey in a single day. New York City is about 300 square miles and the largest single desert locust swarm in Kenya according to reports is approximately 925 square miles (Smithsonian Mag). There is no indication or consensus regarding the length of this outbreak. Historically, they can last for months or years, but the timeline is dependent on the effectiveness of control actions and environmental conditions.

The second half of 2019 saw above-average rainfall, severe flooding, and strong cyclone activity affecting Yemen, Ethiopia, and the rest of the Horn of Africa (ReliefWeb). These extreme weather conditions created ideal breeding grounds for locusts with wet soils, ample vegetation, and insufficient monitoring as well as inadequate early action, particularly in regions with ongoing conflicts like Yemen and Somalia. Locust swarms are best controlled in fields and across landscapes, before they reach the current scale and at the egg and hopper (adolescent) growth stages (FAO). Right now, swarms need to be controlled in Ethiopia and Kenya, but also in Somalia and Yemen, to limit the scale and severity of the outbreak. With ongoing conflicts and instability in this region, this effort was stymied and is an ongoing challenge.

Effective landscape locust control efforts are limited to aerial and mounted chemical spraying of breeding grounds and areas of recent infestation by mature adult locusts. Though in-field management can have some limited positive impact on protecting crops during an active swarm event, the extremely dense populations in present swarms make them nearly impossible to control without coordinated governmental and transboundary action.

According to Qu Dongyu, the director-general of the United Nations Food and Agriculture Organization, the UN has acted quickly to respond to this outbreak. The UN’s Office for the Coordination of Humanitarian Affairs has released $10 million from its Central Emergency Relief Fund to national governments, but the FAO is urgently seeking $76 million from donors and other organizations to help the affected countries fight the outbreak (The Guardian).

After only peripheral impact in 2019, the desert locust outbreak reached the Nuru Ethiopia operating areas of Kucha and Zala woredas this week. In 2019, the movements and impact areas of the numerous large swarms of locusts were limited to eastern Ethiopia. However, Nuru was monitoring the situation closely and local staff built strong relationships with regional and woreda level agricultural and cooperative ministry offices responsible for coordinating locust response. As early as Q4 2019, Nuru-supported cooperatives were receiving timely information regarding locust movements and planned government responses. As of January 2020, the Ethiopian government had sponsored the aerial treatment of nearly 10,000 hectares of land. The Nuru Ethiopia team is actively engaged with the government to ensure areas impacted by the locusts within and surrounding Nuru operating areas receive treatment. 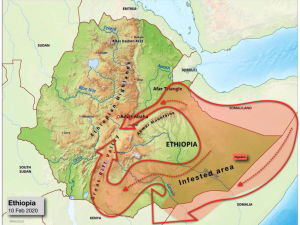 The swarms are presently isolated in northern and eastern Kenya. Migori and Homa Bay counties have not been impacted. The Nuru Kenya team is aware of the locusts as it is prominent in the Kenyan national news, and they have begun to engage with the local government to ensure the preparedness of supported farmer organizations and farmer member households. 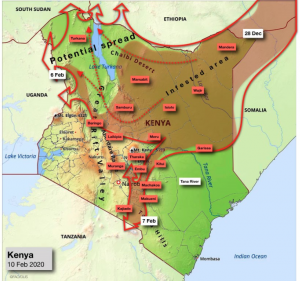 The Nuru model builds resilience of livelihoods and households through diversification of on-farm activities, increasing regular savings behavior, and building agency through the collective social and economic action of the farmer organizations it supports. These efforts will help households in Ethiopia cope with the short-term impacts of the desert locusts and advocate for government support with aerial control, but the call to action requires international coordination and funding to support national control efforts.