The ONE Campaign Power Project: Using Your Voice to End Extreme Poverty

While Nuru is hard at work on the ground in Kenya and Ethiopia, working with local leaders to build the knowledge and tools needed to end the cycle of poverty, the ONE Campaign is working hard to raise public awareness and to advocate on behalf of the people and programs that are making important strides in the fight to end extreme poverty. It’s an honor to be a part of both these teams as we strive toward a common goal.

I recently had the opportunity to travel to ONE’s D.C. headquarters to lend my voice to an important issue – energy poverty. Today, 7 out of 10 people in sub-Saharan Africa don’t have access to electricity. Energy poverty effects the ability to keep vaccines cold and to light operating rooms at night. It means that kids don’t have a safe place to study after dark. It inhibits the growth of the economy. Most importantly, it hinders our ability to end the cycle of extreme poverty.

Having traveled to Kenya and Ethiopia in my role with Nuru, I understand how important this issue is. Earlier this year, ONE started the Power Project to help raise awareness and gain support for the Energize Africa Act, a bill which was introduced to the Senate in June and would help to bring reliable electricity to millions.

As part of the Power Project, ONE challenged their Congressional District Leaders to get 50,000 letters sent to the Senate in support of the Energize Africa Act. In September a group of those volunteer leaders, including myself, went on a three day “Power Trip” to Washington, D.C. to deliver advocacy messages to Congress. We also had the opportunity to meet with ONE’s leadership and to learn from other organizations in various meetings and by attending USAID’s Frontiers in Development Forum. We each came away with a greater appreciation for what ONE is working to accomplish and more insight into how we can use our voices and our networks to further those efforts. 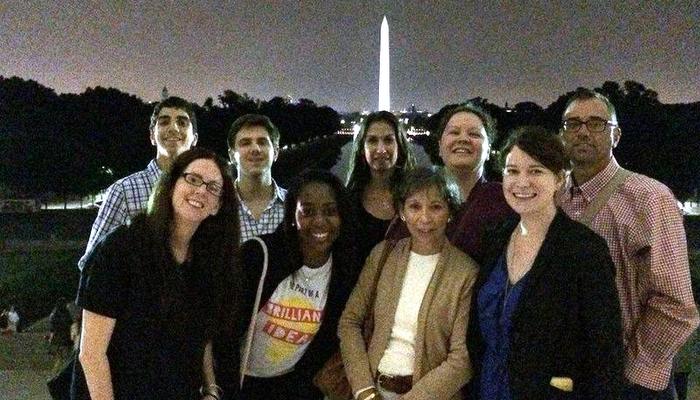 Due in part to the Power Project, the Energize Africa Act now has 21 co-sponsors in the Senate. You can help by signing the petition at http://www.one.org/us/take-action/energy-poverty/.

The fight to end extreme poverty will not be won by a single organization. It will take the combined efforts of many parties to attack it from every angle. In addition to your support for Nuru, you can add your voice to the cause by joining the ONE Campaign at www.one.org.

Originally from Savannah, Georgia, Elizabeth earned her BS in Business and Masters of Accountancy from The University of Montana. She then moved to Anchorage, Alaska where she provided audit and advisory services to public companies, non-profits, and governmental entities at KPMG. She taught Auditing and pursued doctoral studies in Corporate Social Responsibility at The University of Arkansas before deciding to follow her true passion: ending extreme poverty. She and her husband live in Atlanta, Georgia and enjoy traveling and volunteering together. She is currently serving as Controller for Nuru. Elizabeth believes that we can and must end extreme poverty and is excited to be working toward this goal.

Senior Accounting Manager — Originally from Savannah, Georgia, Elizabeth earned her BS in Business and Master’s of Accountancy from The University of Montana. She taught Auditing and pursued doctoral studies in Corporate Social Responsibility at The University of Arkansas before deciding to follow her true passion: ending extreme poverty.