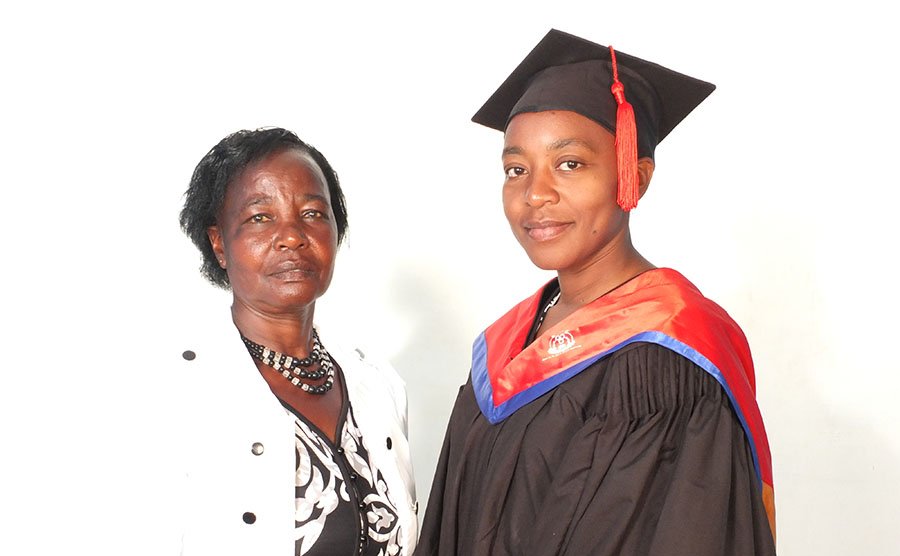 #MyMomIsStrongBecause through her struggles and hard work, she gave me a better life than the one she had.

My mother, Lydia, hails from Embu in eastern Kenya and was born to a family of twenty-six siblings from three co-wives. Her story is one of breaking many barriers, including breaking the generational cycle of poverty experienced by her family.

My mom was disadvantaged from the start simply because her mother—my grandmother—was the first of three wives. Traditionally, the eldest wife becomes quickly neglected as soon as the younger wives come along. Demands for the husband to provide basic care for their children, like clothing and school fees, are often unmet. My mom did not receive her first pair of shoes until she was 17 years old!

Despite my grandfather’s lack of interest in his own children, my grandmother fought hard to make sure my mother and her sisters got an education, which meant finding work on neighboring farms to earn income. They all woke early in the morning to till the land, took a break to go to school, returned to the farm after school to till again until dusk, and then spent the night hours taking care of household chores. This was their daily schedule for years! My grandmother worked the farm the entire day to ensure the plot would be cleared by dusk—otherwise they would not receive even a single shilling for the day’s work.

Through hard physical labor, my mom completed secondary school and attended college in Nairobi where she obtained her teaching certificate. The cost of living in Nairobi was quite high, so she moved back home to Embu after graduating where her father and the village elders put tremendous pressure on her to marry. Her father had not recognized any of her educational accomplishments until she earned her teaching certificate in Nairobi; but now that she was college educated, the marriage dowry was higher. This dowry of cows and cash would be divided by the father, uncles and village elders. (The bride’s mother receives a very small portion of the dowry – just enough to buy a dress or a pair of shoes.) Even though her father did not take part in educating her, he benefitted from her struggle to educate herself once he finally married her off.

While growing up, my mother could not escape the many retrogressive traditions of her community. Most girls married young and quickly became homemakers, mothers and farmers—rarely having the opportunity to work outside of the home. My mom was determined that her children would not experience the situations that she and her siblings lived through. She shielded us from early marriage and traditional rites such as female genital mutilation which is still to this day practiced in many rural communities.

#MyMomIsStrongBecause she was there for us when our dreams and aspirations conflicted with the retrogressive traditions of our community.

My mother knows ridicule and stigmatization. In our culture, sons are valued more than daughters. By the time she gave birth to a third daughter, her marriage was very shaky. Despite having a son as her fourth child, her husband left to marry a second wife. Separation and divorce had their toll on her—especially since she fell very sick at the same time. She strongly asserted herself when her own marriage broke up, choosing to leave the marriage to make room for the second wife and have a chance to rebuild her life with her four children. Moreover, she overcame barriers to make sure each of her children—and not just our brother—would inherit land. Traditionally, daughters are not permitted to inherit land as they are expected to be married off.

My mom has a passion for teaching and always gave her best no matter what. She often received commendation and awards from the Ministry of Education for her excellence in teaching English. She advanced her own career to higher and higher levels within her profession. I admire her commitment to her chosen career even though it was not a lucrative one.

She always challenged me, the firstborn girl, to be a good role model to my siblings. As a single mother, her primary school teacher’s salary could not comfortably educate us all. She made me learn responsibility and accountability early in life, asking me to put my college education on hold and engage in income generating activities to augment her income in order to help my two sisters to complete secondary school. Despite missing out on school at that time, I felt proud and that it was for a worthy reason. After my sisters graduated, my mom ensured I got into college. I am grateful that she has continued to support me throughout my life even after growing up and leaving home. Through her moral support and advice, I have continued to build my career and pursue further studies.

Her resilience and resolve have been a great inspiration for me. Whenever I face challenges of gender discrimination, threats and even violence, I draw my strength from reflecting on what my mother has been through and brace myself to face my adversity.

In my mother, I have a role model, friend and confidant. Although I have no daughter of my own, I am determined to positively impact the many girls in the rural remote communities where I work in order to carry forward the example my mom set for me. Her willpower and sacrifice have inspired me throughout my life and career. I am grateful that my mother was brave enough to break traditional barriers to give me a better life.

As she moved into her retirement home recently, my mom recounted the many hurdles she has been through with a look of contentment and pride. She brought down barriers that could have hindered the achievement of our goals. I have great admiration for her bravery and I never want to let her down.

Nuru Kenya Managing Director — Pauline Wambeti believes in “not waiting for other people to make the changes for us, but to make the changes ourselves.” Having invested over 15 years in community development in Kenya, Pauline is currently the Managing Director for Nuru Kenya. Prior to joining Nuru, Pauline worked for the United Nations Environment’s Regional office for Africa-Nairobi. She has been a Programme Officer for the National Organization for Peer Educators; a Business Development Officer for K-Rep Bank Ltd and, a Program Facilitator for Doctors of the World. Pauline has studied Social Work and Community Development in addition to post-graduate studies in Development Studies and Project Management. She is a 2018 East Africa Acumen Fellow.