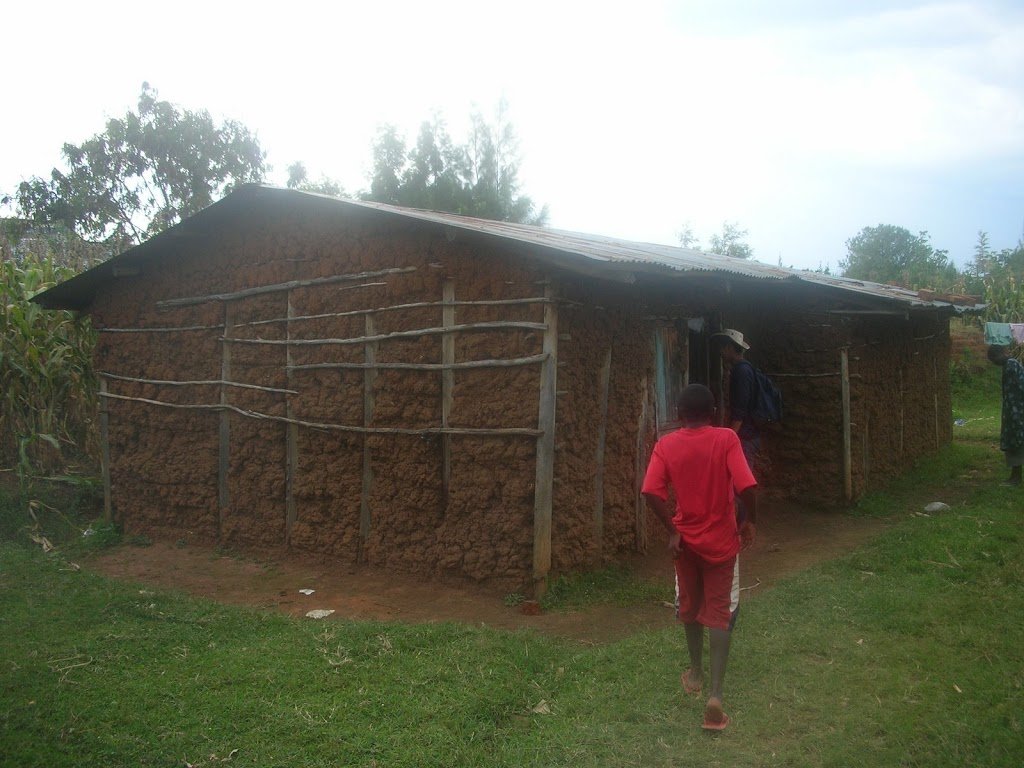 Birthdays are a funny thing. Their value seems to deteriorate over time. As a kid, I remember thinking that my birthday was basically the most important day in history – minus Christmas of course. I would toss and turn all night long the night before my birthday thinking about how much fun the following day would be – games, friends from school coming over and spending the night, cake and ice cream, and, of course, presents! As I get older, though (yes, I know I’m old), birthdays become a thing I try and forget or ignore. It becomes just another reminder that my back and knees are aching more – and that maybe that ache isn’t just from my old job, but from the fact that I’m getting old! It’s not really all that bad, and I’m mostly just joking, but the truth of the matter is that birthdays – as I see them – just really aren’t that big of a deal. I saw a very different perspective today. 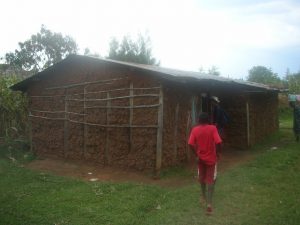 There’s a very nice lady named Mary that lives next door to us in a mud hut with her two sons, Delvyn and Manuel. The family lives in abject poverty, but somehow, they manage to survive – and live a very happy life. Those two boys are two of the nicest, kindest, and most loveable kids I’ve ever met. I talk with Mary once in a while. Her English is actually very good – a constant reminder to me that poverty does not necessarily equal lack of knowledge, and that I (living my affluent life in America) am actually the ignorant one – knowing only one language (some of you would probably say that I haven’t really even mastered that one yet).

Mary was talking with one of the girls we work with here at One Acre Fund this week, and somehow, the conversation turned to birthdays. Mary told my friend that Manuel’s birthday was coming up on Saturday. He would be turning four. In fact, Delvyn’s birthday was coming up as well – about a week from now. He will turn ten. “When are you going to have the party?” my friend asked. “Sorry?” Mary said – a look of bewilderment on her face. “The birthday party for the kids – when are you going to have it? Are you planning on inviting a lot of kids?” my friend asked. Mary’s eyes began to water. “No, we’re not having a party.” “What do you mean?” my friend asked. Mary slowly went on to explain that the children had never had a birthday celebration. No cake…no singing “Happy Birthday”…no friends…and no presents. Mary began softly crying. My friend was astonished. We determined that we were going to throw these kids a birthday party.

After careful planning, we threw the party yesterday. It was one of the most touching things 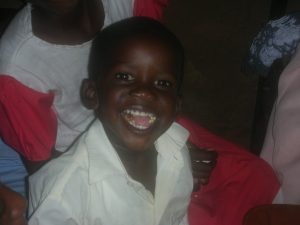 I’ve ever witnessed. My other two friends managed to make a cake (not sure how they achieved that one) – complete with “Happy Birthday Manuel” and “Happy Birthday Delvyn” written in some sugary concoction resembling icing on the top. I managed to acquire some balloons and helped Mary decorate her hut with them. The time for the party finally came and I strolled next door to see how things were going…wow. That’s all I could say. I ducked my head and walked through the door into Mary’s tiny 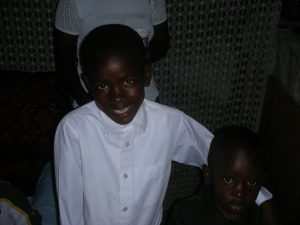 mud hut…and into a sea of kids – about twenty of them (ages 3 to 12) from the neighborhood – all singing and laughing and jumping around – having the time of their lives. Of course, when I walked in, I was instantly inundated by happy shouts of, “Habari Mazungu?” (how are you), “Karibu!!” (welcome), and “Sasa, Mazungu?” (what’s up, white dude – loose translation). Since most of these kids had never seen a white person before One Acre Fund came, they get pretty excited when I come around.

Mary had never thrown a birthday party before, so she wasn’t really sure what they were supposed to do, but she did just fine nonetheless. She had the kids taking turns reciting poems, leading songs, and playing simple games. None of these kids had ever been to a birthday party before. They were all very excited – bouncing of the walls like they had just finished off four pots of coffee. 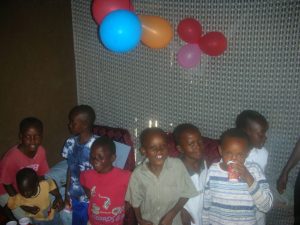 Manuel and Delvyn were dressed up like little gentlemen in their nicest shirts for the occasion. Mary had managed to make popcorn which the kids quickly devoured (popcorn is an unusual treat here) and everyone had a small glass of sugar water. Then came the highlight of the party…the cake. My friends brought the cake around to the back door and gave it to Mary. She lit the candles (that she had fashioned out of old paraffin) and then slowly brought it into the room…singing “Happy Birthday to you…” Those kids had never seen a birthday cake before. They went crazy!!! I think they sang “Happy Birthday” to Manuel and Delvyn approximately 7,000 times – they just couldn’t get enough. When they finally calmed down, everyone just kind of sat there…waiting – not sure what to do next. Mary looked at me with a questioning look on 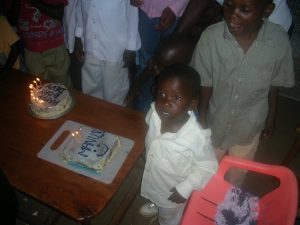 her face. I explained that Manuel and Delvyn should maybe make a wish and blow out the candles, and then cut the cake so everyone could eat it. Little Manuel seemed terrified of the fire on the cake, so his big brother took care of blowing out the candles – which prompted another round of ecstatic cheers and another hundred rounds of the “Happy Birthday” song. Mary then cut the cake into tiny, tiny squares and served them to the kids like little bite-sized appetizers.

After the cake-cutting, the party started winding down. Manuel started getting impatient and cranky and began crying when Mary tried to feed him a second piece of cake. It was time to go. Mary thanked everyone for coming and then sent the kids home with their mothers who had quietly shown up to take their kids home.

I walked home deep in thought – thinking about this summer that God has used to shape my life in such a profound manner. Sadly, my time here is almost over. I will get on a bus Tuesday morning to make the long, bumpy journey back to Nairobi to catch a flight to the next phase of my life. I will miss the people and close friends that I have made here – Kenyans and Mazungus alike – Daniel, Abysolom, Josephine, Charles, Andrew, Chris, Makiko, Mary…all have left a mark on my life in their own special way. All have helped prepare me for what the future may hold and my plans going forward with Nuru International. They have taught me so much. I have already used many of their lessons in the extensive revisions that I have made to the business plan for Nuru. I am more excited than ever to get started.

At the same time, though, I am ready to come home. I could sure use a slice of Applewoods Pizza and a cup of Starbucks (yes, I am a hopeless slave “to the man” – Nescafe instant coffee grounds can only get you so far). I miss my friends and family – you all who have faithfully followed my journey here this summer. This has been an incredible time for me as I walk around this corner in my life into my new beginning. Thanks so much for sharing in this walk with me. Your comments and emails have been a constant source of support and encouragement to me. This will be my last posting. The next time you hear from me, it will be in person. I can’t wait to see you all.

As the last faint remains of sunlight gave way to the first stars of the night above me, I listened to the kids laughing and chasing one another as they made their way back to their homes. The party was such a huge success. There was no Chucky Cheese, no pizza, no Coke, no Kool-Aid, no paper plates, no utensils, no music, no pony, no clowns, no streamers…not even any presents. Yet, that room was so full of love and happiness. I have seldom seen such a happy group of kids. There are so many in this world like Mary and her family who have so little. We take even the smallest things in life for granted – I am guiltier than most about this; but I was reminded today that life isn’t about things. It’s not about what we have or don’t have. It’s not about how popular we are or how important we can become in the eyes of others. It’s not about accumulating a large amount of wealth for some future grand retirement plan. I was reminded today – in the innocent laughter of these kids – that life is about loving your fellow man. It’s about giving of yourself to see the joy light up in another’s face. We are only given one life in this world to live…how will you live that life?

God bless each of you.