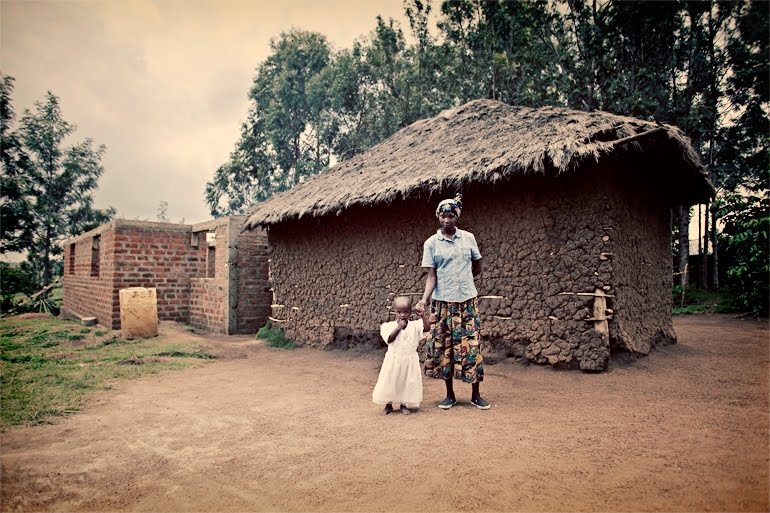 Times they are a changin’

Yesterday was one of the best days I’ve had in a while. I slot a few days every week to go around and visit the farmers and check up on them to see if they are practicing the farming techniques that we have taught them and just to say hi and see how their families are doing overall. Yesterday I went around with Andrew and Josephat – Field Manager and Field Officer from Nyangiti sub-location.

Josephat took us to several of his farmers’ shambas and then we finished at his compound. I was a little shocked by what I saw. I entered his compound (two mud huts with tree branches acting as a fence) and there in the center of the compound were around twenty new timber posts sticking out of the ground with several new sheets of metal roofing next to them. “What is this?” I asked in surprise. He looked up and grinned ear to ear. “I am building a house for my family,” he said in broken English. Then he gave me a sideways, knowing look and chuckled…”Nuru maize,” he said with pride.

Things are changing in the Kuria District of Kenya. Last year during this time, Josephat was trying to hire himself out to make enough money to feed his family. Some days there was no work, and his family had no food those days. He had harvested only 3 sacks of maize on his one acre farm that season, and his family needed at least 5 to make it through until harvest the next season. This year was different, though…Josephat harvested 24 sacks of maize from his one acre of land. He paid off his Nuru loan with 6 sacks, set aside another 6 sacks to feed his family, and sold the remaining 12 sacks in the market. He took the extra money and opened a Nuru savings account in the newly created Jamii Development Fund (village bank). Then he took out some of that money, bought materials and started construction of a modest house of timber, brick, and iron sheets for his family.

I have shared a lot of statistics with all of you about the incredible progress here on the ground, but today, I want to give you four powerful anecdotes from the community that demonstrate the unbelievable change that has begun in the Kuria West District:

We said goodbye to the family, and I got a little choked up as I turned to walk out of the compound…knowing that soon, for the first time in his life, Josephat will not be waking up in a mud hut with cow dung coating the walls. “it’s about time,” I thought. “It’s about time.”