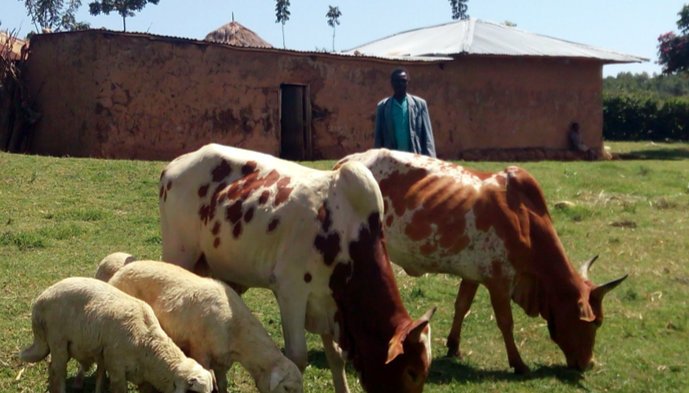 The hilly village of Nyamagenga in Kuria East sub-county is a breath-taking sight. From a distance you would mistake it for bare land where no farming takes place. The scenery is fascinating despite the erratic rainfall patterns and recurrent crop diseases that attack maize, the community’s staple food. If you traveled there, moving from one farm to the next, you will find not only maize, but bananas, cassava, and sweet potatoes. Farmers here diversify their crops to ensure they can address food security and produce income for their households. Here’s a story of one of these farmers.

Mr. Johnes Rioba lives at Nyamagenga. His household comprises nine members. His wife is a small scale businesswoman who runs a roadside food kiosk in Kegonga town. His seven children learn at Nyamagenga and Koromangucha primary schools. He is not only a farmer but also a pastor at his local church. Since joining Nuru Kenya in 2015, he has been able to improve his farming. In addition to providing for his family, he has managed to save income from surplus maize yields and pay off debt.

Mr. Rioba is also the chairperson of Rebwi Farmers’ Cooperative Society. The cooperative was established in 2015 by 36 farmers and the membership has since nearly doubled to 66 under his leadership. The members are mainly drawn from the Nyagenga region. This area is a hotspot for ethnic clashes. The sub-location marks the boundary between the Maasai and the Kuria communities. These communities have engaged in cattle rustling since time immemorial. Ethnic tension is rife and the rustling involves the use of arms. The situation is compounded by the fact that both communities are right at the border of Kenya and Tanzania.

This is the second season Rebwi Cooperative has worked with Nuru Kenya. This season, they had to contend with low rainfall and an attack of Fall Armyworm. However, the farmers were well equipped on how to plant the short maturity crop varieties to mitigate against the low rainfall. They also applied chemical sprays and even employed mechanical removal to combat the Fall Armyworm. They are very delighted to have a good harvest with majority getting 15-20 bags of maize per acre as compared to the 2-5 bags prior to Nuru’s interventions.

“We want Rebwi Cooperative to be a story of success. We know of organizations that swindled money from the farmers through organized groups and cooperatives but Nuru is different. We are seeing the benefits ourselves. We want to work hard to stop the many challenges of hunger and theft of our few cows,” explained Rioba.

Rebwi Cooperative is doing quite well as are the other 13 Nuru organized cooperatives.

“We surprised everyone. We began small and hail from a very remote and marginalized area. People even fear coming here often due to the insecurity. Clashes erupt any time. Yet amidst all this, we worked hard and emerged top in applying the modern farming technology we were taught. This led to completion of loan repayment even before the deadline, and increased shareholding contribution. Many people started applying to join our cooperative!” Rioba exclaimed.

The cooperative members highlighted hard work, teamwork, determination and resilience as key ingredients to their success. They have readily adopted the new knowledge and skills they receive from Nuru Kenya, including marketing training, and the cooperative members were able to quickly map out and penetrate the local market.

The 2018 season holds even more prospect for the members of Rebwi Cooperative. They have met the eligibility criteria to participate in a newly launched dairy project. They are excited at the opportunity. Last year in December, chairpersons of all the 14 cooperatives went for an exchange visit at a dairy cooperative in Kapsabet. “I was part of the team that visited Lelchego Dairy Farmers Cooperative Society. I personally got inspired. I learned a lot from our counterparts who have indeed struggled to successfully lead their cooperative from scratch to their current position. They now control millions of shillings. They even own an agro-vet business and a micro-finance bank! They have changed the lives of their members and the entire community. That is what we want for Kuria East,” Rioba enthusiastically stated.

He elaborated that Rebwi Cooperative members were continuing to receive training on the breeds suited for their region and the fodder requirements. They were currently planting the fodder seeds.

“The training is very important. We want to transform ourselves and all our community. We shall not need to fight to feed ourselves. We are very happy Nuru is here with us,” added Rioba.

Rebwi and other Nuru-initiated cooperatives are building a sustainable path for households to lift themselves out of extreme poverty permanently, and to chart a pathway for meaningful choices for generations to come.

Laureen is Nuru Kenya’s Communications Assistant. She has previously worked as a Social Marketer for the Healthcare Program and Social Marketing Department. Prior to joining Nuru Kenya, Laureen served as a Social Worker at St. Franciscan sisters. Her role was to oversee orphans and vulnerable children enrolled in public primary schools .She has an experience in home based care and support for people living with HIV. Laureen has completed her diploma in Social Work and Community Development from Mount Kenya University, and trained in Home Based Care, Orphans and Vulnerable Care, Behavior Change Communications, Sanitation for Marketing and Social Work Development in Kobujoi Institute of Development Studies.