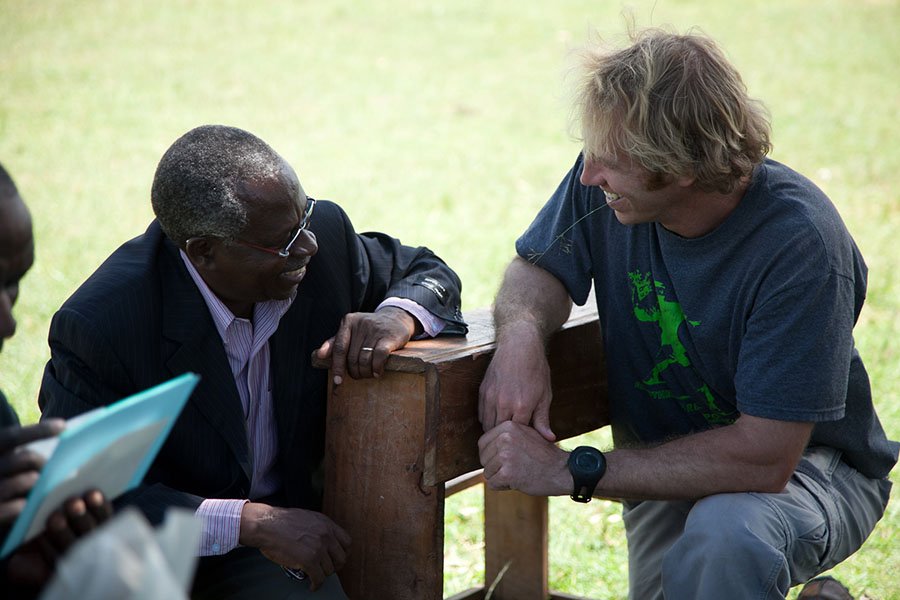 An end and a new beginning: reflections on Nuru expat exit in Kenya

The sun was setting as I stood by the grave marker of the final resting place of my friend, brother, and Nuru Kenya co-founder, Philip Mohochi. When I was here a year ago at his passing, I had been overwhelmed – even numbed by the throngs of people coming to pay their respects – all crowding around the small gravesite to say goodbye.

Now it was just me and him.

Tonight I had gone to visit Philip’s wife, Mama Chacha, and Philip’s niece, Vicky Tissian, to have a final goodbye chai with them before heading out to Nairobi one last time en route to the U.S. Before heading inside their small house, I had snuck around to the back of the property to his gravesite to reflect and pray and have a final word with Philip before leaving.

“Seven years,” I thought as I stood next to his grave. “You would be so proud to see this day, Tata.”

Over the past seven years, Philip and I had developed and led a team of inspiring, courageous Kenyans and expats to try to achieve what few believed possible: to create a locally-led, self-sustaining integrated solution to eradicate extreme poverty – first in Philip’s home of Kuria West sub-county and then scaling throughout remote rural areas of Kenya. Now, after overcoming countless, seemingly impossible obstacles, I was on the eve of leading the last expat team back to the States. Our Kenyan friends had been leading Nuru Kenya and scaling it now on their own for the last six months with us in overwatch, and it was clear that we expats were now just getting in the way. It was time for us to go. As I stood next to Philip that night, I began to be flooded by seven years of memories – faces, sounds, smells, and emotions.

I moved to Kenya in September of 2008 to launch Nuru. My first week in Kuria West was really tough. I was attacked by thieves and black widow spiders, struck by lightning, experienced an earthquake and contracted a severe case of malaria. This was my first week! I felt powerless and defeated. I had never quit anything, but I was ready to throw in the towel and head back to the U.S.

I walked to Philip’s house to deliver the bad news that the project was over before it even got started. He invited me in and offered me a cup of chai. Philip had grown up in extreme poverty in Kuria West. He did well in school and built a successful career in Nairobi before moving back to his village to sacrificially serve his people. He listened intently to my story of the past week and how I needed to leave. Finally, he looked up with compassion in his eyes…

“Rafiki, you have indeed had a very difficult week. But I want you to consider something before you leave. The farmers who are waiting for us to help them…they have bad weeks too…except they have a bad week every single week. Mothers go months without knowing how they will feed their children the next day. You took medicine and feel better now. They don’t have medicine, and their children get malaria and die. These farmers need us. They need the chance to have choices in their lives. If you stay, together we can transform these communities so the farmers never have a bad week again. You can’t give up.”

I left his home changed…with a dramatically different perspective and understanding of our work, of this man Philip, and of the farmers I was to live alongside and work with.

Over the next six years, I continued to learn from Philip about how to lead and serve. We were both passionate about building a sustainable Kenyan-led, Kenyan-owned organization that could scale throughout Kenya to end extreme poverty. Nuru was founded on the philosophy that a strong Kenyan woman who possesses the same skill set and knowledge that I have is far more capable of sustainably ending extreme poverty in her country than I will ever be. My expat teammates and I would play the role of catalysts that would help Philip and his team unlock their full potential to design and scale solutions better than outsiders could. This would eventually require the exit of the expat team. Together Philip and I intentionally messaged this to the community and our Kenyan team as it grew, and we carefully monitored indicators that tracked our progress toward clearly defined exit criteria.

In May 2014, Philip was tragically killed in a car accident. In addition to the terrible pain of losing my friend, I was afraid – afraid that Nuru Kenya would not be able to survive the untimely passing of its courageous founder…afraid that the six-year struggle and gains that our expat and Kenyan teammates had made in the fight against extreme poverty would be all for naught. However, in the days and weeks that followed his death, I soon discovered that I had nothing to fear. The Kenyan team that rose from this tragedy became the final proof point that Nuru Kenya had become a truly sustainable organization with a leadership pipeline capable of absorbing even the worst shocks.

Nine months before his death, Philip had chosen an incredibly talented leader named Pauline Wambeti to be his successor. Pauline had grown up in extreme poverty and has dedicated her life to the service of others – leading agriculture teams, MFIs, regional health initiatives, and eventually joining the UNDP. Philip had intentionally selected a leader from a different tribe to lead Nuru Kenya after him because his vision was to reach all of Kenya, not just the tribal area that he came from. Over this past year, I have seen this brave woman win the hearts and minds of thousands of farmers and overcome intense tribal rivalries to inspire a team of 250 Kenyans to hit highly ambitious impact and growth targets as she has begun scaling Nuru beyond the tribal boundaries of Kuria.

In seven years, more than 300 Kenyans and 40 expats have partnered with over 78,000 people in Kuria West to transform their communities with lasting meaningful choices. At a quiet ceremony two nights ago, I officially handed the reins of Nuru Kenya over to Pauline and her team. I know that she and her team are ready, and I know that Nuru Kenya has now become what Philip and I had always intended it to be…Kenyans leading Kenyans out of extreme poverty permanently.

I looked down at his final resting place one more time. I knew Philip was watching me, smiling from above. “I hope you can see what you did, Tata. You have freed your people, and your vision and struggle will bring hope to millions here in Kenya and beyond in the coming years. Thank you for being my teacher, my brother, and my friend. Thank you for teaching me about hope and the dauntless power of one soul with an unstoppable vision.”

I could hear the clinking of teacups inside the house and knew Mama Chacha and Vicky were expecting me. I looked up at the clear night sky, closed my eyes and listened to the wind turn the leaves in the trees alongside the field, bringing signs of coming rain.

“Goodbye Tata. Until we meet again.” I turned and walked down the hill toward the warmly lit home to have chai with my friends.