The purpose of the Nuru Household (HH) survey is to collect data to evaluate the effectiveness of the interventions conducted by Nuru International’s programs. The survey primarily addresses Nuru’s Healthcare and Water & Sanitation programs. Due to the holistic nature of Nuru’s model, the survey also aims to assess a few outcomes that result from the overlap of the Agriculture, Community Economic Development (CED) and Education programs (Figure 1). 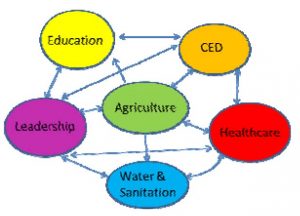 Nuru monitors and evaluates each program area – Agriculture, CED, Education, Healthcare, Leadership and Water & Sanitation. The monitoring system collects data about operational activities, such as the number of staff members visiting households or the number of health behaviors taught. The evaluation system collects outcome data that results from each activity. Outcomes include changes in behavior and attitude, such as the number of people reporting to have slept under bed nets or those with an improved ventilated pit latrine.  Baseline data that is collected, like in the current survey, will not yet assess change in behavior or attitude, but rather the current situation of the community before programs are implemented.

Healthcare
From 2008-2010, the Nuru Healthcare program trained Representatives who were members of Nuru farmer groups. The Representatives were the first cadre of health trainers that the program attempted to train to disseminate disease prevention information. From the Representatives and from other individuals in the community, approximately 44 Community Health Workers (CHWs) were trained and supervised by Nuru Field Officers (FOs) and Field Managers (FMs). From 2010-2011, the Nuru Healthcare program worked with CHWs, who taught key health behaviors household-to-household in the sublocations of Nyametaburo and Nyangiti in Kuria West district. Nuru assisted in organizing and conducting trainings for the CHWs – providing skills training, supervision, and performance assessment for the home visit tasks. The Healthcare team will scale to the Ihore sublocation in May 2012, and Moheto and Ngochoni sublocations all in Kuria West district in June 2012. The HH Survey is currently being performed in the new sublocations to collect baseline data before the HC program initiates interventions.

The goal of the Nuru Healthcare program is to reduce the mortality rate of children under 5 years old in a sustainable and scalable way. The Healthcare team aims to communicate clear and correct messaging about disease prevention, teaching 6 key health topics which include:

The Healthcare team teaches 8 key health behaviors within the topics, including:

Thus, the HH survey will also help to gauge which stage of behavior change community members are in, if at all, based on Nuru’s Healthcare program intervention. The HH Survey asks questions to determine if individuals know how to prevent certain diseases, if they know what causes diseases, and if they are making the changes to prevent diseases from occurring in the first place.

Below are the outcome indicators or program metrics the HH Survey will measure for the Healthcare program:

Water & Sanitation
The goal of the Water & Sanitation program is to reduce water-born diarrheal diseases in rural communities. This is carried out through H20 training, which consists of how to use clean water (purifying), hand washing, and using latrines.

Below are the outcome indicators or program metrics the HH Survey will measure for the Water & Sanitation program:

Overlap of Programs
Additional questions related to agriculture were added to triangulate community-wide data for yield compared to Nuru yield for maize. Through the Community Economic Development (CED program, Nuru members can possibly access loans for paying for a plough, a plough cow or school fees. The following indicators are included in the HH survey due to their ability to cross-cut programs, supporting Nuru’s holistic model. They are not yet program metrics, but will help us begin to better understand the interplay between programs.

Logistics
To implement the survey, the M&E staff trained 6 teams with 2 enumerators each (12 total enumerators) to carry out day-to-day survey operations. One M&E Field Manager (FM) supervised 2 teams each, for a total of 3 survey groups. Each survey group carried out the survey in separate villages. The survey took approximately 40-50 minutes to complete. Each team aimed to complete 5 surveys per day, or 30 per day combined. A team of 3 data entry staff was also trained to Check, Score and Code surveys similar to the MPAT.