The Social Marketing (SM) Team visited Namanga, Kajiado County for an exchange visit with the Ol Kerempe Group in mid March this year. From one border town Isibania to another border town Namanga, the team was able to learn first-hand how this community based organization employed the use of magnet theatre to be able to pass messages to the community. The reception the Ol Kerempe Group gave the SM team was awesome. They were also more than willing to share knowledge and skills with their guests..

Pauline Wambeti, the Nuru Kenya (NK) incoming Executive Director, chose to have the team go on an exchange visit to Ol Kerempe because of the way the group has been able to use magnet theatre to pass their message by employing minimal resources. The group also shares a lot with NK in that they seek to reach target communities that are in rural settings. Pauline felt that the SM team would learn a lot from the trip.

A lot they did learn. The SM team was able to see how Ol Kerempe planned their skits in the shortest time possible and with the available resources they had. According to Manga, Ol Kerempe Chairman, they based their skits mostly around what was happening in the community. Through the planning that Ol Kerempe included the NK SM team on, SM was able to pick up more information on what goes into organizing skits.

Manga explained that the group had people who could play different roles. The first thing they did was to brainstorm on what was to be done, including deciding on an icebreaker with the main role of pulling in the crowd. Other skit lessons they gained from Ol Kerempe were the rolling out of introductions and also freeze moments. With that classroom bit, we set out to experience practicability.

The next day was market day at a remote centre in Metto. The place was off the main Namanga Road and into the interior of that area. It took us 4 hours to get there. The place is so remote that one is unable to get any signal to use a phone. There are no public vehicles to that place and locals board lorries to that area to access the market to sell their wares.

It’s a perfect Masai market. So Ole Kerempe came in and showed us how with just an icebreaker in mother tongue, they were able to get the whole market to leave their wares and come listen to their message. They were doing a skit on the dangers of Charcoal sellers and how they were destroying families. The way they got the crowd engaged, were the pointers that the SM Team learned. 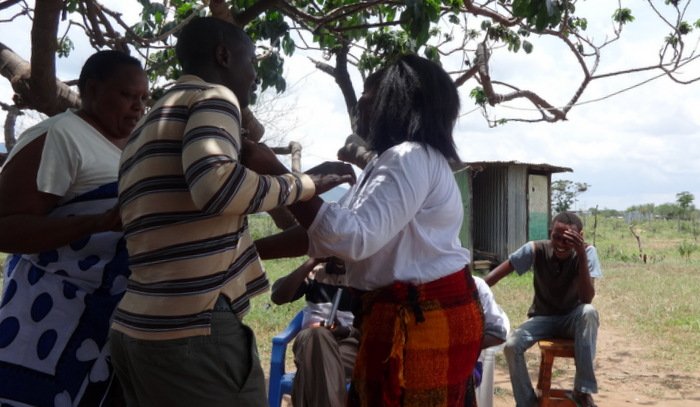 So the next day, roles were reversed and the SM Team were roped in the skit. They were performing live for a curious audience at Maili Tisa. They were fast learners, I have to admit. They performed excellently. Murimi, Nyangwina, Lauryn and Anna all admitted to having enjoyed themselves and they were quick to add that they would ensure they replicated the same in Isibania. Bennadette (IPM) urged the SM Team to go back to Nuru and replicate what they had learned to be able to ensure more community engagement with Nuru Kenya.

We left Namanga, a happy lot. Of course having extended an invitation to Ol Kerempe to visit us in Isibania to see how well we had perfected our skills in skit performance and magnet theatre.