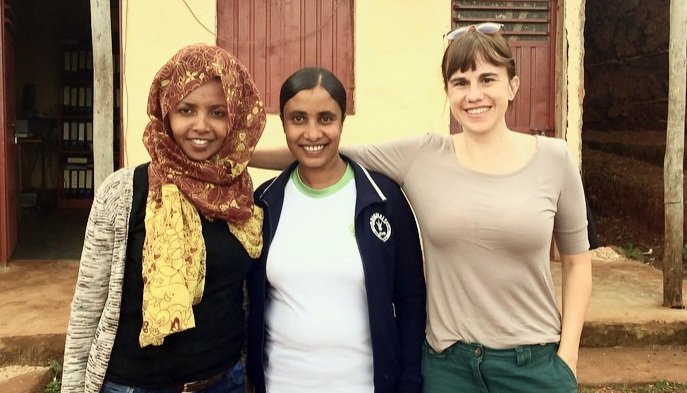 In honor of International Women’s Day, I recently sat down with Feven Yimer to ask her about her experience with women in development, leading an organization, and influential women in her own life.

Feven Yimer has been working with Nuru Ethiopia since its Education Program began in 2014. Originally from Addis, Feven was driven to work for Nuru in southern Ethiopia by a curiosity about other parts of her country, a love for adventure, and a strong desire to create change in Ethiopia. Feven has a teaching background but NGO work was new for her when she joined Nuru. She began as an Education Field Officer, was promoted to Education Program Manager, and has recently been acting as delegate Country Director for the last six months. Working closely with Feven over the last six months, I have been amazed at her intelligence, resilience to challenges, and ability to lead.

Amy: There’s a lot of conversation and research about how women are central to development. What role do you see for Ethiopian women in poverty alleviation or rural development?

Feven: Both genders have something to contribute to these efforts but women are traditionally more focused on family welfare and child-rearing. This means women are often acutely attuned to the different causes of poverty across a household and can help design effective solutions for themselves and their families. Women are also often marginalized and not able to make choices in their own lives. Yet, they hold a wealth of knowledge and skills that can contribute to better conditions for not only themselves or their households, but also their entire communities. By focusing on empowering women in rural communities, we can tap into a huge reserve of unused potential.

Feven: A lack of women in leadership positions is a problem in many sectors in Ethiopia. Even before working for Nuru, I would often be one of a few female teachers working above the primary school level. Culturally, many women in Ethiopia are raised to be quiet and keep the peace. This makes many of us quick to handover decision-making power or authority to men in professional settings. It also makes it harder for us to decide to pursue opportunities like promotions or leadership positions. This dynamic might exist in other places but is definitely reinforced through the typical upbringing for girls in Ethiopia.

There is this stereotype that women need to compete or will become jealous of each other in the workplace very easily. I think this is incorrect. Women can support each other to overcome work place obstacles by sharing experiences and discussing challenges through a professional lens. For a while I was the only Ethiopian female manager at Nuru Ethiopia and then Birhane Araya, the Leadership Program Manager,  joined our team. She’s been a great friend and advisor to me since joining and I try to give her advice about professional challenges as well. We’ve managed to hire and retain some more women in management since then and I’m excited about Nuru Ethiopia improving in this area.

Feven: At first the role seemed filled with obstacles – like a very big, steep mountain to climb. Each day there was a new challenge and they were all very different. I thought I would never get to the top some days! I’ve needed to take a lot of time to reflect and think things through at night to find solutions at times. Over time, I started learning to rely on the team more and take things day by day, step by step. Despite the challenges, it has been a tremendous professional development opportunity for me and I have learned so many lessons. In the end, I am very grateful for the experience and really excited about the growth I’ve gained through the opportunity.

Amy: In honor of International Women’s Day, tell me about a woman who has been influential in your life.

Feven: From a personal standpoint, I would have to pick my mother. She had a difficult childhood and worked so hard to ensure that we did not endure the same. I grew up in Addis and was relatively comfortable but only because my mother took on all of the burden and worked really hard for the entire family. She has faced every challenge that came her way and never seems to become tired or less resilient. She’s been a role model I’ve kept in mind throughout my life and inspires me both personally and professionally.