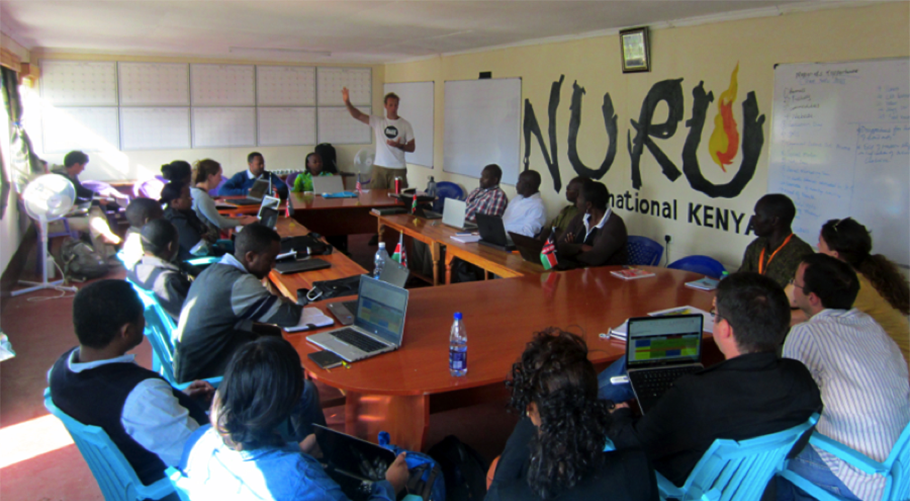 Cultivating a Culture of Failure and Learning

Nuru International set out to design the first self-scaling, self-sustaining, holistic, development model to end extreme poverty in rural, remote areas, in our lifetime. We started with a pilot project in Kuria West, Kenya in September 2008. Six years later, our integrated model is making attributable impact and Nuru Kenya is months away from being completely locally managed and led. June 2015 marks a major pillar of proof of concept, leadership sustainability, and the exit of international teams. With this milestone in sight, now seems like an opportune moment to reflect on what has been key to our success so far: failure.

Nuru’s CEO, Jake Harriman, cultivates a culture of failure that is reinforced by one of our most deeply held values: fail fast, learn fast. He encourages us to take bold chances, and he empowers local staff to make critical decisions. He not only expects us to assume significant (though calculated and mindfully hedged) risk to achieve results, he demands it. We even document and share our failures so both Nuru and other organizations can avoid repeating mistakes. It is within that learning-based eco-system that we win.

In that spirit, I was discussing past failures with Nuru Kenya’s dynamic and highly talented Country Director, Pauline Wambeti. She asked me: “To what extent do you think I should tolerate failure in my organization?” I told her, “As much as is in your instinct.” However, for those times instinct doesn’t provide enough clarity, I advised her to consider whether a situation falls in one of these five categories of failure:

Failure of circumstance is that which is the result of something outside of our control. Our reaction should be to thoroughly debrief the event and integrate those lessons into our planning for next season, hedging future risks and learning from the experience. Failure of circumstance reflects the unfair, cold, dark and non-linear world in which we live.

Failure of effort is the cancer of impact. Here employees are capable and equipped, but not doing the work required of them. In these situations, we must look at ourselves first: Are we doing something that is draining their motivation or creativity? Next, we must give employees the benefit of the doubt: Is there something going in their personal lives? If the answer is ‘no’, then it’s time to come down hard. Failure of effort is a deadly cancer. It has to be cut away through counseling, work performance plans and by our example as leaders. If, however, we are unsuccessful in our remediation and the failure of effort becomes a pattern, then it’s time for staff changes. Development is a very serious profession. The stakes are incredibly high; we’re in the big leagues. This isn’t company softball; not everybody gets to play.

Failure of character is the most complex and serious form of failure. Here someone has lied, cheated, stolen or violated an understood code of ethics or norms. This is a tough one for the manager. It is in this sort of failure that employees learn the most (if given a second chance, when a second chance is warranted) and can become even better employees if properly remediated. Here the manager has to rely on his or her gut. Adjudicating failures of character requires the most thoughtful reflection as it has the potential for the most positive or negative impact, both on your organization and on the person who failed.

And so I wrote these categories on the board in Pauline’s office with a faded black marker and I looked over as she stepped away and she had written a good thing in her notebook, circled.

I don’t think there’s a need for any more classes on cultivating a culture of failure with Pauline… She’s put it better than I ever could.