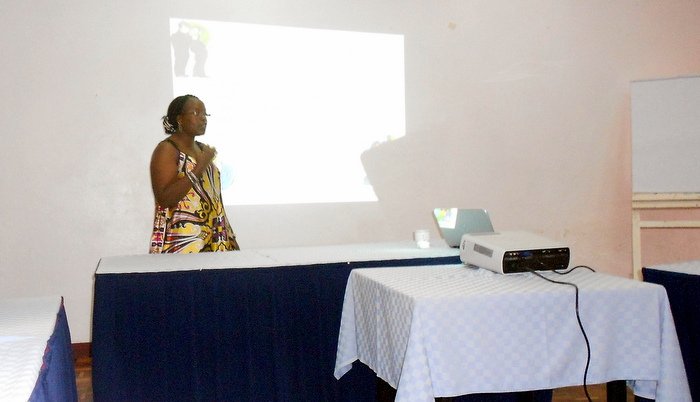 The last few years at Nuru Kenya have been years of tremendous growth. As the organization grew and evolved it became apparent that someone was needed to coordinate across impact programs to ensure Nuru Kenya was achieving holistic impact. To fill this gap a new position, the Impact Program Manager (IPM), was created. Nuru Kenya was lucky to find Bennadette Mugita to fill the role and help build it out from concept to practice. In this post, Bennadette reflects on her first year as IPM.

Bennadette, tell us about your background and why you were interested in Nuru and the IPM position.

For more than 5 years, I have worked with non-governmental organizations involved in the implementation, monitoring and the delivery of health care services. After gaining lots of experience in different countries and programs, I reached a point where I realized I wanted to do something beyond just health and try to work in the community I grew up in. I am originally from Kuria East District in Kenya. After some research, I applied for the Impact Programs Manager (IPM) position with Nuru Kenya. I chose this position because it spans program areas and I wanted to reach beyond my health expertise. I was also extremely interested in the holistic, sustainable and scalable development model Nuru uses to end extreme poverty, as my experience taught me there were strong connections between different areas of development.

What do you do on a daily basis and what do you most enjoy about the role?

The role was new to Nuru, so it has been an interesting and challenging first year. My role involves working with the departmental mangers to create strategy, implement systems and processes and integrate our operations. Aside from operations and strategy, I strive to build a servant leadership culture where everyone works together towards a common goal. In addition to supporting my fellow Nuru staff, the position involves a lot of coordination with other stakeholders both from the government and private sectors. What I like most about my job is that I work on a diverse range of issues as I collaborate with all four impact programs: Agriculture, Financial Inclusion, Healthcare and Education.

What are some of the challenges you’ve faced in your first year as IPM?

Some of the challenges associated with the role have been figuring out how to equally distribute time to the impact programs, build expertise in all four areas and keeping pace with all the plans and activities carried out while at the same time handling administrative duties. Additionally, all of our Impact Programs experience different challenges, which our able team works hard to solve.

In Agriculture, challenges include unpredictable weather, recurrent maize diseases and inputs loan repayment. The challenges of the Financial Inclusion Program are closely tied to those of Agriculture since both depend on farming as the major source of livelihood. In 2015, the rains were delayed, which negatively affected the ability of farmers to save regularly. The Education Program has to overcome obstacles such as pupils’ absenteeism and adjusting curriculum to reach learners with different ability levels. The Healthcare Program often faces challenges when there is a disease outbreak such as cholera. Outbreaks increase demand for our services as we work with households to implement precautions against these outbreaks and other preventable diseases.

What are some of the highlights from your first year as IPM?

Though the challenges we face are diverse and complex, my first year as IPM has also been filled with successes, which keep my team motivated and pushing forward. One big success was the concerted effort from the Agriculture Program during farmer recruitment. We managed to enroll a total of 6,738 farmers and issue them with inputs for the 2015 long rains season. The Healthcare Program achieved impact in 2014 where more than 80% of households adopted our healthy behaviors. The Education Program successfully launched their activities in a new division. In Financial Inclusion, households increased savings levels and improved their ability to absorb financial shocks. As a team we also embarked on a planning process to figure out how to make our programs more community owned, sustainable and integrated. We have a lot of exciting ideas and adjustments that we plan to implement from 2016 forward.

What have you learned over the last year?

Overall, I have learned a lot in my first year as Nuru Kenya’s IPM and have really been able to build up my technical knowledge. As a leader, I have learned to be flexible, delegate well and trust my teams. I am excited to continue to work with Nuru as we embrace the holistic approach to change the lives of rural Kenyan families. Though there will always be challenges, I find meaning each day as I know that I and my team are able to make a real difference in the lives of some of the most vulnerable populations in Kenya.