So the WatSan team has been in full marketing mode for the past several weeks. We’ve been conducting trainings in our villages in which we show our videos on sanitation and hygiene while performing role plays that discuss issues that families face in deciding whether or not to purchase a latrine. We learned a lot about these issues through our focus groups and have tailored our marketing approach accordingly. Judging from the reactions that we’ve gotten from our audience, I think that our staff did a pretty good job with the focus groups. Here’re some of the comments that we’ve gotten from people in our audience.

“Did you send someone to look at our community before making these role plays?” – Apparently, the issues that we discuss in our role plays were so relevant to them, they thought we had sent “spies” in order to see what they were doing. I guess in a way we did send spies…

“We didn’t know that we were on the wrong path (referring to open defecation). Now that we know the importance of latrines, we know what we should do.” – So at one of our meetings, I had one of our Kenyan friends sit in the audience and listen in on what people were saying, and that was what he over-heard (I guess we really do send in spies…). This seems to corroborate with the story of “the chief’s latrine” that we keep hearing. Basically, many farmers dig holes on their compound as “latrines” so that the chiefs in their area won’t fine them for not having a latrine. However, since farmers don’t understand the importance of latrines, they only complied superficially.

“Don’t leave, train us some more!” – This comment really brightened up my team. At one of the communities, the clouds were rolling in and our team decided to dismiss the training so that people could escape the rain. But, they were enjoying the training so much that they refused to let us leave.

Although we are constantly improving our trainings by recording feedback from the audiences, it seems that these trainings are sparking the community to re-think and start discussions about their own sanitation. We hope that these discussions will translate into purchases of our latrine in January when our farmers start to get more income from their harvest. We’ve had some customers so far, as shown in the picture below, but we’re hoping for a lot more in the future. 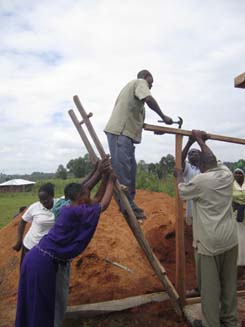 That’s what we call teamwork here at WatSan.