Nuru Is “On the Map”

I hope you don’t mind the slight interruption of the 2-week mapping video series, but I couldn’t pass up the opportunity to share a bit of recent news that impacts Nuru’s presence in Kenya.

While we have been working diligently to make a reliable map of the area that includes all households, clinics, drug dispensaries, VCT, and water sources, Nuru and its surrounding area is becoming better known for two other reasons as well – one positive, the other both dangerous and distressing.

Let me start with the bad news: Last week the Ministry of Health confirmed a cholera outbreak in the Mabera Location. (One of the two new areas Nuru has begun its scaling in.) Despite the MOH’s diligent response, the death toll has surpassed 20.

Cholera has the deserved reputation of being an extremely violent illness, however, it is preventable and treatable.  The symptoms mimic an intensified version of those common of typical water and food-borne bacterial diseases resulting from fecal contamination. The incubation period is shorter and body fluid loss from diarrhea and vomiting is far greater, sometimes exceeding 10 liters of diarrheal fluid per day if untreated. (The average adult male body has 40 liters of water).

Treatment is ‘simple’ if one has access to Oral Rehydration Salts (ORS) and antibiotics (cotrimoxazole, erythromycin, doxycycline, chloramphenicol, or furazolidone.) We have been assured by the MOH that all clinics in the surrounding areas have been stocked with the appropriate treatments, yet the ongoing concern remains: what happens to those who don’t make it in time, those who are unaware of the virulence of the disease, and those who cannot afford to make the trip to the clinic?

This is where Nuru can assist. The Healthcare team is working with the Water and Sanitation team to inform the local Health and Wat/San Representatives about the current situation, transmission, prevention, symptoms identification, and treatment options.  The Healthcare team also held an emergency meeting for our CHWs to provide a framework for prevention, monitoring, and treatment education at the household level in areas neighboring the outbreak sight. 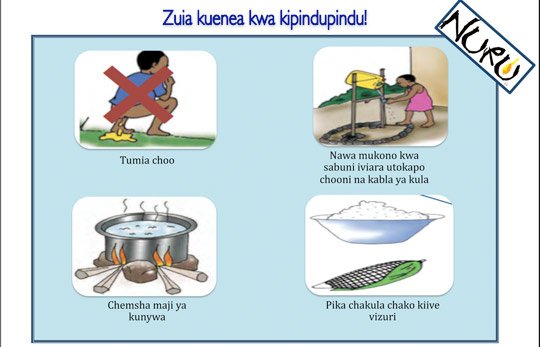 In better news, last Monday Nelly Andega (Healthcare Field Manager and Community Development Committee member), Philip Mohochi (Nuru’s Community Development Committee Chairman) and I partook in a long anticipated meeting with the Nyanza Provincial Coordinator for Community Strategy and the Provincial Medical Officer (PMO) in Kisumu. The purpose of this meeting was to introduce Nuru and solicit support and advice for our CHW unit. They were pleased to learn more about our work, especially since we are operating in a province that has extremely low household healthcare coverage (~14%).  The creation of CHW units is the official recommended scheme outlined in the Kenya Essential Package for Health (KEPH and The Second National Health Sector Strategic Plan specifics CHW approaches for rolling out healthcare at the community level. 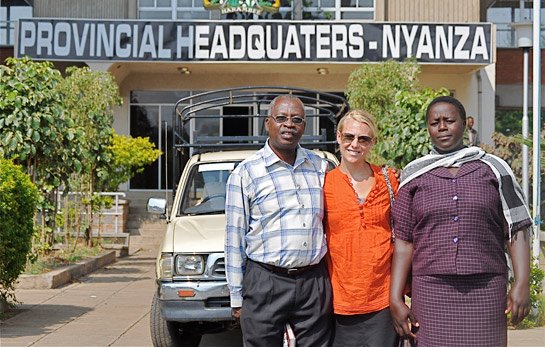 The provincial officers are committed to supporting our expansion, sharing data with us, and fully recognizing our activities as they coincide with the national health goals, including the reduction of maternal and under five morbidity and mortality rates, increased immunization and vitamin supplementation coverage, and greater usage of Long-Lasting Insecticide-Treated Nets.  They also informed us we will be receiving an invitation to the Provincial Community Strategy Meeting in late September, where other attendees will likely include UNICEF, APHIA II, World Vision,  Essential Health Services, UCSF’s FACES Program.

Now that we are on the map – or at least the radar of the Kenyan Government and those involved in disease control, our physical mapping plans will prove even more relevant for support, program implementation, monitoring and evaluation and knowledge sharing. Keep an eye out! The maps are soon to come.