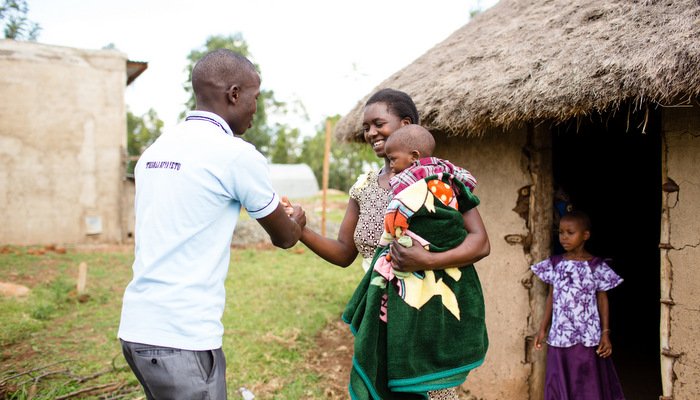 Feature photo: A Nuru Kenya Healthcare Field Manager introduces himself to a Nuru farmer family during a home visit.

As the Nuru Kenya Healthcare Training Manager, I was delighted to add seven new Healthcare Field Officers (FOs) to my team. After their successful recruitment, training and shadowing, it was time for the mapping process whereby FOs would locate the various Nuru farmer households at which they were to conduct home visits. There they would assess the existing knowledge, attitudes and practice on healthy behaviours within the household in order to tailor future healthcare messages accordingly.

With the support of Agriculture and Healthcare FOs, the two-week process kicked off on the 15th of June on a good note and the new FOs were optimistic about the outcome. FOs introduced themselves to the household members and introduced the activities conducted by the Healthcare Program. Even as the FOs were learning to conduct home visits for the first time, their approach was exemplary. They displayed great knowledge in explaining how the healthcare program was focusing on improving maternal and child health. This created a good impression to Nuru farmer households, and members were visibly anxious to learn more from the FOs.

Chiefs and village elders were very co-operative in assisting the FOs with identifying the households, and government health workers were very welcoming and willing to collaborate with Nuru.

Smiling Anne said, “I learned that even talking is not such an easy task; but [it] requires one to be confident and self-motivated so as to put into practice what one has learned. Above all [I] am happy because the whole process was a learning opportunity for me and [I] am grateful that it was successfully accomplished.”

FOs encountered a few challenges during the mapping process. These included:

Thanks to the hard work of the Healthcare and Agriculture staff, the mapping process was a success. The new FOs are now well equipped with skills to complete monitoring forms, an understanding of the stages of behavior change, training on Nuru’s 10 healthy behaviors for disease prevention and the promotion of maternal and child health, and introductions to the households they visit monthly as of the 1st of July. It was an exciting, enjoyable and motivating experience as the Healthcare Program continues to grow into new areas after the Nuru International expat exit.