So after two weeks, more than 6000L of diesel fuel, and 2 completely worn out carbide-tipped drills (carbide is one of the hardest materials on Earth), we’ve drilled a total of 319m at 3 different locations. According to Maji-Tech, our drillers, this has been the hardest rock that they’ve ever drilled through. One of the locations, a mosque in the town center, hit water and will be providing clean water year-round to thousands of people who are using shallow wells dug next to latrines, and springboxes that dry up. In fact, at one of the current water sources for the town, the women break into fights periodically as they vie to be next in line for the trickle of water that comes out. It’s not uncommon to wait up to 5 hours for water in the dry season, especially if you’re one of the smaller ones.

Another one of the locations, at the Nuru Regional Training Center, also hit water and will provide water for both our daily operations and the families in the surrounding area. 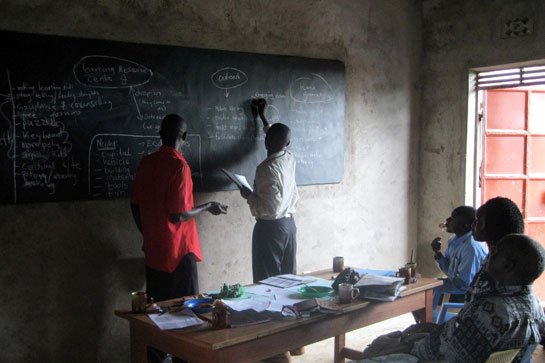 However, the last well, dug at the Nyangiti village, is still in limbo. We have hit water, but it’s only providing about 20L per hour right now. That’s barely enough for a couple families, let alone the whole village of Nyangiti. We’ve consulted with our drillers and hydrogeologist, and the running hypothesis is that a lot of the dust from drilling plugged up the cracks through which water flows during drilling. Our hope is that as we let the water flow out through pumping, the water itself will slowly unclog the cracks in the rock. However, this is just a hypothesis, and the borehole could still end up producing only a trickle for the village. It’s been especially tough communicating this with the community, who have provided lodging and manual labor for the drillers. They were fully prepared to tackle the challenge of maintaining the well as a community, but now we’ll have to just wait and see.