For those of you who are regular visitors to this site, you know that Nuru had a nationwide awareness campaign that had 1500 hundred people participate at 26 sites. But what you didn’t know was that there were others who were inspired to take part in their own “Be Hope To Her” events.

For those of you who are regular visitors to this site, you know that Nuru had a nationwide awareness campaign that had 1500 hundred people participate at 26 sites. But what you didn’t know was that there were others who were inspired to take part in their own “Be Hope To Her” events.

In fact, just a few days ago, Mrs. Stewart, a sixth grade teacher at Nimitz Middle School in San Antonio, Texas helped her students organize their own “Be Hope To Her” Event. Collectively, starting at 830AM and ending with the last bell at 330PM these sixth grade students logged over 100 miles carrying buckets of water. They all wanted to be able to say that for one day they “walked a mile in someone else’s shoes.” 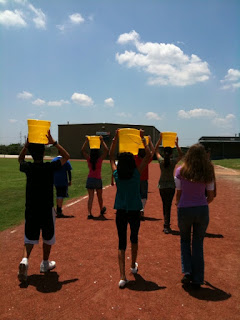 These students not only walked through the day, but they have been learning about the issue of extreme poverty throughout the school year. In fact, these students read Greg Mortensen’s Three Cups of Tea as part of their studies this year.

Mrs. Stewart first discovered Nuru through an article that made it on the apple website in November about how Nuru uses Macs in our efforts to end extreme poverty. When she read the article, she was personally motivated to do something, and she got her students involved in Nuru’s work.

These students have been scouring the Nuru website and reading staff blogs to become better educated activists. I am thoroughly impressed with Mrs. Stewart and her students because they are educating themselves on the issue of extreme poverty, and they are taking action.

On June 3rd, I was able to talk with her class through skype. It was amazing to be able to applaud this incredible woman and her world changing students through video technology. We spent about a half hour sharing with each other, and the students had some really great questions to ask. They are serious about ending extreme poverty, and they know that their involvement in this issue matters.

Some would possibly tell these boys and girls that they are too small, or that their efforts don’t matter, but I told them, and I will tell you as well, that everybody has a contribution to make toward the end of extreme poverty. 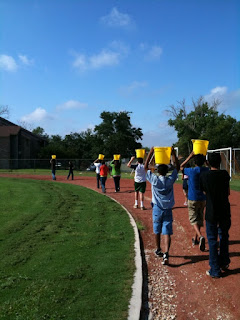 The goal is huge, but it is achievable. Because Mrs. Stewart took the time to educate these students, and encouraged them to get involved, they are joining a generation of world changers, and I sincerely believe that together with your help, all of us can see the end of extreme poverty.

I hope you will follow the lead of these students and get involved in the issue. Together, we CAN end extreme poverty. Together, we can be part of a generation that sees the end of the greatest humanitarian crisis of the contemporary era.