I thought it might be helpful to unravel some of the root issues that contribute to intellectual poverty out here in Kuria. This week I came across a particularly powerful example of these root causes.

I met an old woman this week as Francis and I were looking for the cow path that would lead us back into town. We happened to pass through her compound where we found her seated in the dirt surrounded by 10 or 12 kids, all under 6 years old. After a brief exchange, we got directions and headed off into the bush.  As we walked away, Francis said, “That woman works really hard.” I asked what he meant and if he knew why none of the kids were in school.

He explained that the woman was married young to a lazy man. Not only does she plant and harvest the whole farm, but she also built all of the huts in their compound. She has 5 daughters who were all married off young for hefty dowries. Francis explained that daughters are valued for the bride price they bring and sons are valued for the legacy of children they bring to the family. Since she had no sons, she was considered incomplete by many in the community and consequently used some of the dowry from her daughters to pay dowry on 5 young women who are absorbed into the family as daughters-in-law. These 5 women are technically married to the old woman and had the sole responsibility of bearing children with single men in the community to contribute to the family line. Then, the old woman and her family assume the responsibility for raising the children.

The woman kept bearing children of her own and finally had a two boys. At this point, she had about 9 children, some of which were now having children of their own. She also had the 5 daughters-in-law who were bearing children as well. As the sons reached maturity, they were expected to take on some of the daughters-in-law as wives and bear responsibility for those women’s children. One son took 3 wives and the other took 2. Both took new wives of their own age group as well. The children continued to multiply. The family tree was so complex my head began to swim and Francis asked “Unasikia kizunguzungu?”  – was I feeling dizzy? Though I lost count, I know her family is massive. Maybe something like this? 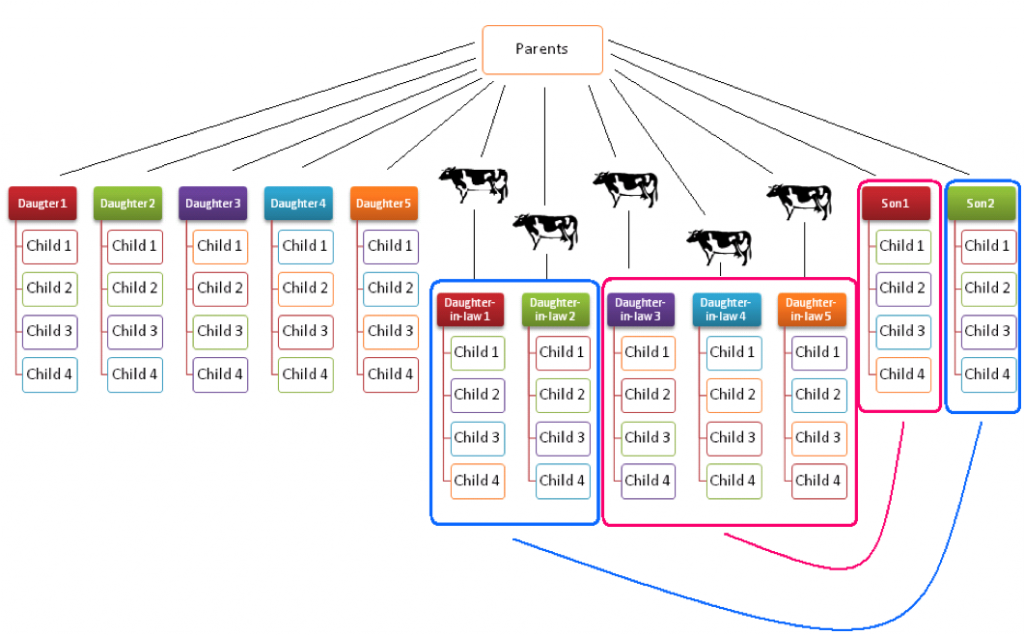 So, this woman has 9 children, 5 daughters-in-law, and around 60 grandchildren. Her sons are overburdened and incapable of sending all of their children to school. In this family, the traditional value placed on large families has triumphed over education.  Though some of the necessity for big families, such as having men to fight in clan wars, has dwindled, many of the adults still lack an understanding of why education is important. And as Francis so clearly put it, this lack of awareness is seriously exaggerating the intellectual poverty here.

As we craft the plan for our model school, our team must consider this cultural reality and determine how we can best impress upon parents the importance of educating their children. As these families become engaged in Nuru programs, they will have more income from their agricultural efforts that be applied to school fees and they need to understand why they should value and prioritize education. We want these parents to no longer use the free primary school system as a daycare but to invest in the minds of these youth and begin to value education themselves.