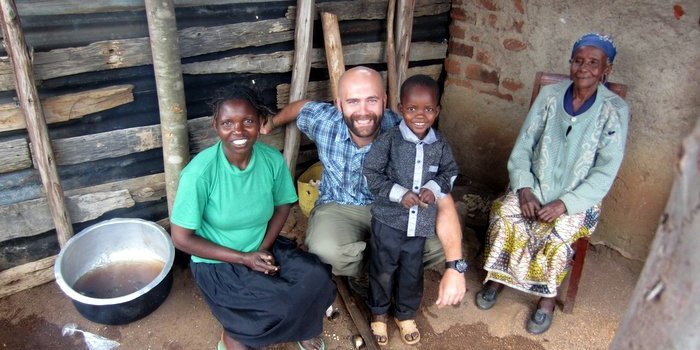 For Veterans Day, Alex Martin shares his story of how he found a fulfilling career – and happiness – working as a humanitarian in Kenya after leaving the Marines. The following entry originally appeared on ONE.org.

Just before leaving the Marine Corps in 2011, I wrote a brief reflection on what I’d learned. I wrote it from a dark bar while sipping a dark whiskey, probably listening to some dark music, but I can’t be sure of that last part.

This gloomy setting was appropriate that day because it was, frankly, a dark time.

I’d spent the previous 11 years in uniform doing work I truly loved. Would I ever be able to find that sort of deep satisfaction and challenge again? Would I ever find such a wildly talented (and hilarious) group of people to work alongside?

I wasn’t sure it was possible. In fact, I was quite convinced it wasn’t possible. I didn’t know what I’d do next. I was convinced that after taking off my boots for the last time, things could never be that good again. Without the mission we had and the Marines I loved, I’d be lost.

One year before, on Veterans Day 2010, I was sitting on a U.S. warship smoking a cigar, staring out into the glassy Gulf of Aden reflecting on a mission my platoon and I had just executed off the coast of Somalia.

Pirates had taken a merchant ship by force and we were tasked to take it back. That day, we faced each pirate rifle-to-rifle and yet, captured each man without taking a life. My men moved expertly that day, I couldn’t have been more proud of their tactics, their courage and their discipline.

After the ship was secure and the 11 hostages freed, we provided our prisoners with water, food and medical treatment. Each man in my platoon that day was a rugged and seasoned veteran of our long wars in Iraq and Afghanistan. They each knew what it meant to take a life and to have a life taken from them.

Our mission that day was to take back the ship, rescue the hostages and do so with the minimal amount of collateral damage and loss of life. As I stared out towards Somalia, I thought of how proud I was of the men that day, that they had done just that.

And I thought about the look in the eyes of the pirates after we captured them and gave them aid. It was the look of men who had never before been shown compassion, who for the entirety of their lives had written themselves off for dead.

These were they eyes of men who couldn’t understand how or why they were still alive. It was the look of a man with a second chance.

I scanned the coastline one last moment, took one last draw of cigar smoke into my lungs and I went inside and called Jake. Jake Harriman is the founder and CEO of Nuru International, an organization that fights extreme poverty in remote rural areas.

He was well known to all of us in the Force Recon community as an incredible combat leader. When he left the Marine Corps to attend Stanford Business School so that he could design an anti-poverty intervention to help fight what he had been so affected by in combat, everyone in our community supported him.

That phone call put me on a path that led me to where I am today, Nuru International’s team leader in Kenya. My job is to identify and train local leaders to design and implement solutions to a community’s needs.

I’m still working with a small unit of highly talented professionals in a dynamic and austere environment… still a part of a vital mission that gets me up, excited in the morning… still challenged… still able to lace up a pair of boots and go to the field.

All my fears from that day of leaving the military have since gone and I’ve found a new home among the brave, talented development warriors I now serve alongside. I’d never thought I’d spend two years living in rural, remote Kenya, but it’s been a transformative experience…

And this is what I’ve learned…

I’ve learned that the sort of camaraderie I loved in the military can exist any place you have amazingly talented people with a good sense of humor, a great leadership ecosystem, and work that gets you up in the morning.

I’ve learned the virtue of slowing down…how to breathe.

I’ve learned that extreme poverty isn’t a strictly financial problem, but rather by a much more complex problem attributed to a variety of complex factors, foremost of which is a lack of meaningful choices.

I learned that farming is damn hard work and smallholder farmers are the world’s bravest entrepreneurs.

I’ve learned that courage, faith and hard work are contagious and mission critical.

I’ve learned that I found true enjoyment in problem solving with a small group of highly talented people in uncertain environments.

I’ve learned that, even in the civilian world, boots are a good thing. To lace them up first thing in the morning and take them off when the sun goes down, feels good. Most days out here I wear flip-flops, but boots are better.

Whether fighting Al Qaeda or extreme poverty, I’ve learned grit is the most decisive trait of all.

Having a routine brings order in an environment of chaos. But I’ve learned it’s ok to have a little less routine. Live in the moment a little bit more. Even when living in that moment is a very hard thing.

Nuru’s integrated model is working. We’ve had incredible successes over the past two years, despite many challenges. Pauline Wambeti, the Country Director I manage, is a thousand times smarter than I am, and her Kenyan staffs are too. They’re making all decisions for their programs and preparing to scale the model to a second district with the complete exit of our expat facilitators nearly complete… I’ve learned that as a manager, when you have great people, you don’t have to do much other than leave them alone and give them the resources they need to do their work.

I’ve learned it’s good to do one thing every day that makes you uncomfortable.

I’ve learned that laughing at yourself keeps you honest.

I’ve learned how important it is to have animals around us in our lives.

I’ve learned there are many casualties in this war as well. People just die slower.

I’ve learned to appreciate how precious a life really is…and make it a habit to give thanks for one small thing each day.

I’ve learned that the best intervention starts with the capacity building of the local leaders…we got this wrong so often in Iraq…Nuru’s leadership component is critical to this unique poverty fighting engine.

I’ve learned you don’t need a uniform to serve, to feel that something special. I’m reminded daily by our farmer’s and the Kenyan and expat staff I work with, courage is not what’s on your chest, it’s what’s in it.

I’ve learned the best way to honor those no longer with us – taken from us by war or extreme poverty – is to live this life as deliberately and excellently as we can…with as much purpose and intention. This is how we honor their memory…by moving forward despite the reality that the war bitterly continues.

It’s an honor to reflect and remember the sacrifice of the many on this Veterans Day with the other warriors of the development world; it’s because of them and because of this work that I did not get lost a few years ago. It’s because of all that I continue to learn out here from the brave farmer entrepreneur…

I was told recently my eyes look happier these days…it’s the look of a man with a second chance.