After a challenging 2013 long rains season, the Nuru Kenya Agriculture program (NK Ag) is gearing up for a fresh start. Next year, the NK Ag team will be encouraging crop diversification among Nuru farmers by offering inputs and trainings for crops other than maize. It will be the first year Nuru farmers grow alternative crops in the long rains season. This exciting transition will result in Nuru farmers growing three staple crops in 2014; brown sorghum, finger millet and maize.

This cereal crop is well known among Nuru farmers and is commonly mixed with cassava or maize to make ugali, a type of stiff porridge that is the staple food for many Kenyans. Sorghum is resistant to maize lethal necrosis disease (MLND) and is a hardy, drought tolerant crop that is also rich in iron.

Finger millet is the crop that the NK Ag team is most excited about growing in 2014. In Kuria, it is used in both ugali and ugi, a porridge commonly eaten as a breakfast food in Kenya. Finger millet helps combat malnutrition, as it is high in iron, calcium and zinc. It also has exceptional storage capabilities, which means farmers can reliably store it to consume in between harvest seasons. Millet is also drought tolerant, MLND resistant and ready to harvest after 3-4 months.

Both brown sorghum and finger millet are already grown in Kuria West. But, when growing these crops, farmers traditionally use no fertilizer and broadcast seeds. As a result, these crops are notorious among farmers for requiring a lot of labor and returning little in the way of yield. This is where Nuru comes in; NK Ag will offer high quality sorghum and millet inputs on loan and train farmers on planting techniques that reduce the traditional labor burden while increasing yield. The NK Ag team is really enthusiastic about bridging this gap and bringing new skills and knowledge to farmers.

NK Ag has been growing maize with Nuru farmers since the program’s inception. Maize is Kenya’s main staple food and is easily marketable within many parts of the country. It requires less labor than many crops and has been grown by Kenyan farmers for generations. Having maize as part of our crop offering is essential to our farmers’ livelihood and satisfaction with the NK Ag program. NK Ag has been giving training on growing maize for years but the team always trying to improve and is striving to make 2014 the most fruitful year to date. 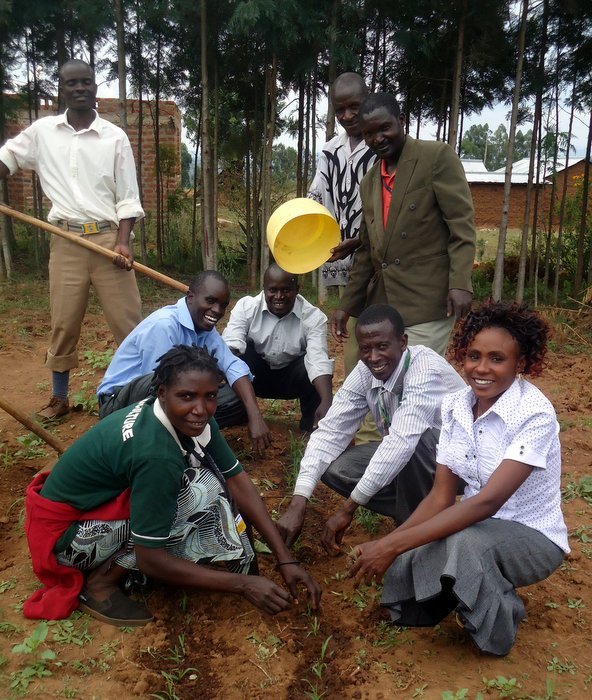 Crop diversification takes a tremendous amount of planning. For each new crop, the NK Ag team must determine agronomic best practices, source quality inputs, train field officers, market to farmers and gain practical experience growing the crop before it is rolled out as a core operation. Right now, during the short rains season, each NK Ag team member is growing a small plot of sorghum or millet to gain experience and demonstrate the new planting techniques and yield potential to farmers. The NK Ag team knows this added work burden is worthwhile, as diversification will lower risk, reduce pest and disease pressure and improve soils and nutrition. In 2014, NK Ag’s crop diversification will result in even more resilient and dynamic solutions for some of the challenges facing Kenya’s small-scale farmers.