Nuru Ethiopia’s Agriculture Program is founded on two basic premises. The first premise is that subsistence crops (sweet potatoes, taro, and enset[1]) that make up the majority of local diets should be prioritized to accomplish the primary mission of ending hunger in communities throughout Ethiopia. The second premise is that the performance of income-generating crops (maize, beans, and teff[2]) can be improved and contribute towards the economic development of the kebeles[3] where Nuru Ethiopia is working. These two premises complement each other and create a firm foundation for the two pillars of the program: food security and economic development. By strengthening traditional subsistence agriculture and optimizing its buttressing of food security while simultaneously improving the incomes of farmers through grain cooperatives, Nuru Ethiopia is presenting a diversified approach to agricultural development that is unique, resilient, impactful, scalable, and sustainable.

Improved varieties (higher yielding and more nutritious) of sweet potatoes and taro are the primary subsistence crops that Nuru Ethiopia is promoting in the kebeles where the Agriculture Program is implementing its intervention in 2014. Because these crops are subsistence foods and have little commercial value, they are not economic growth engines and cannot be easily promoted through loans repayable by cash. Fortunately, both sweet potatoes and taro have long periods of intergenerational genetic stability and can be propagated easily through the cuttings of the vines or tubers. The improved varieties of these hunger-fighting crops are being distributed to farmers and repaid in multiplied vines (sweet potatoes) and cuttings (taro). Nuru Ethiopia will be focused on quality control for these vines and cuttings and make sure farmers are equipped with the proper training for handling and transporting them. When farmers repay their loans in-kind, the vines and cuttings will be scaled to new kebeles in a pay-forward pattern. 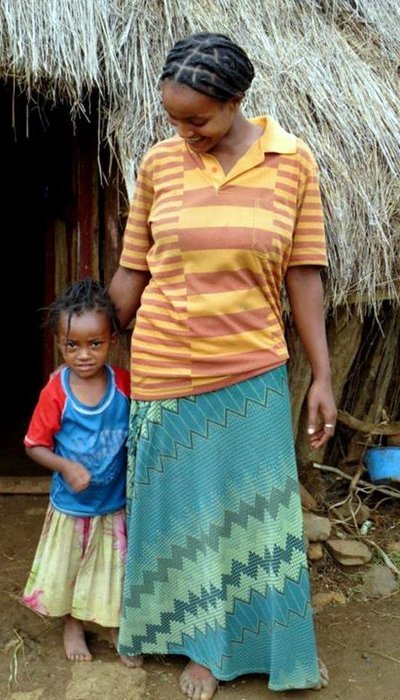 Maize and haricot beans are both staple crops in the kebeles and, along with teff and coffee, are the primary income-generating crops. They have high market value and can be stored for extended periods of time as a reserve for fighting hunger or for generating income in improved market conditions (arbitrage). Both of these crops are currently cultivated using sub-optimal practices that produce poor yields. This is a result of a lack of access to inputs (improved varieties of maize and bean seeds and fertilizers), a lack of access to labor[4], and inappropriate agronomic practices. In addition, farmers lack access to good markets where they can sell their maize and beans at higher prices. The loans for these inputs are provided through a farmer-owned cooperative that provides market linkages, local and regional granaries, and a consistent access to inputs and extension services.

[1] Enset (or “false banana,” Ensete ventricosum) is a member of the Musaceae family and its flesh and roots are harvested for food

[3] A kebele is the smallest administrative unit in Ethiopia. It is similar in size and concept to a “village”

[4] Nuru Ethiopia is approaching this problem by promoting group work.