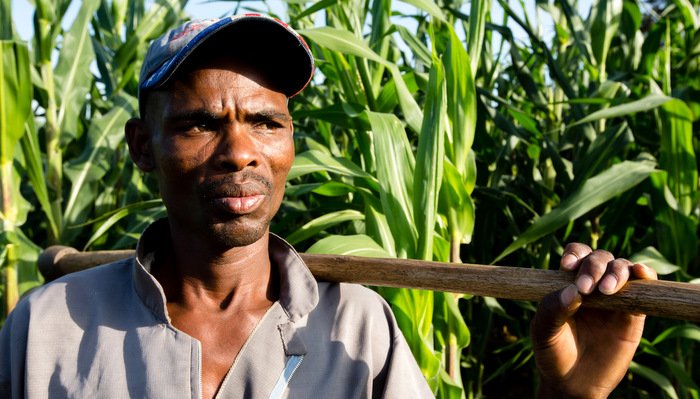 Joshua Makira Chacha is from Ihore Kenya. He’s been farming with Nuru for the last three years, and his story is both heartbreaking and inspiring. Heartbreaking because no one should have to go through the challenges he and his family had. They did not have enough food to eat. How heartbreaking would it be to look at your children knowing that you and they were hungry and not having any idea what you could do about it or when the hunger would end.

In Joshua’s words, “Not being able to provide for my kids and my wife made me feel like I was nothing.” When Nuru came, Joshua learned new methods for planting and provided a loan of good seed and fertilizer. Joshua was able to go from growing five bags of maize to twenty two bags of maize on his farm.

Not only that, now Joshua is teaching other families, He and his family are not only able to address hunger, but they are practicing healthy behaviors like boiling water, sleeping under mosquito nets and using latrines—so he and his family can stay healthy. He also joined a savings club which helps him to save in case of an emergency the money will help him.

Very happy because he can now feed his family, has beddings, house, and cattle. Nuru didn’t give him a handout, but rather gave him the ability to provide for his family. And now, the result is not only seen in the improved crop yields, but more importantly, in the restoration of Joshua’s dignity as a human, as a man, as a husband, and as a father. In his own words, “Now when I hang out with friends, I feels like I am somebody, a real father.”

And stories like Joshua’s are becoming reality for literally thousands of families in Kuria West, Kenya. It is an honor to work together with you and Nuru to make this change possible.