Maize and haricot beans, according to the strengths and needs assessment carried out by Nuru International’s Monitoring and Evaluation team last year, are two of the most important subsistence crops that farmers in Boreda depend on (2013). Further research undertaken by the Agriculture Program team has shown that most farmers plant maize and beans on separate plots using continuous cropping methods. In other words, farmers have dedicated plots of land for maize, haricot beans, sweet potatoes, and other crops and don’t use crop rotation or intercropping methods. In fact, most farmers have a negative perspective of intercropping as an “outmoded” or “primitive” practice. This is partially a result of the promotion of monoculture by governmental and non-governmental agencies throughout Ethiopia, which has gradually moved small-holder farmers from sustainable mixed farming to unsustainable continuous cultivation and monoculture. Part of the mission of Nuru Ethiopia’s Agriculture program is to increase yields using environmentally sustainable agronomic practices that avoid the promotion or continuation of monoculture.

Haricot (common) beans (a leguminous food crop) fix nitrogen in root nodules inhabited by rhizobia, a bacteria of the genus Rhizobium, and supply nitrogen to the plant and soil that would normally be applied through chemical fertilizers. In local varieties of legumes, the roots of these crops are more likely to be colonized by rhizobia than imported seeds which might require inoculation by appropriate varieties of rhizobia (see Cleveland and Soleri 1991). Studies have shown that intercropping beans with different cereal crops yield different results, with maize-haricot bean intercropping showing the highest potential for a symbiotic relationship that can improve the nitrogen content of a land’s soil (Fenliang et al 2006).  One agricultural research program undertaken in Algeria showed that maize intercropped with haricot beans actually performed better than monocropped maize and increased the uptake of nitrogen by maize (Latati et al 2013).

The majority of nitrogen that is returned to the soil occurs when the legume is cultivated (which takes a generous proportion of the fixed nitrogen) and the plant residues are ploughed and composted back into the soil. This practice will be promoted by Nuru Ethiopia in our agriculture trainings and will thus contribute to the overall amount of nitrogen available on lands in Boreda woreda.

While attending trainings in Sodo, Wolayta Zone earlier this month, the Nuru Ethiopia Agriculture team learned about the optimal agronomic practices for intercropping maize and haricot beans. This practice is described by a 75 cm x 25 cm spacing of maize and 75 cm x 10 cm spacing for haricot beans. The following diagram illustrates the spacing that is being promoted by the Nuru Ethiopia Agriculture program: 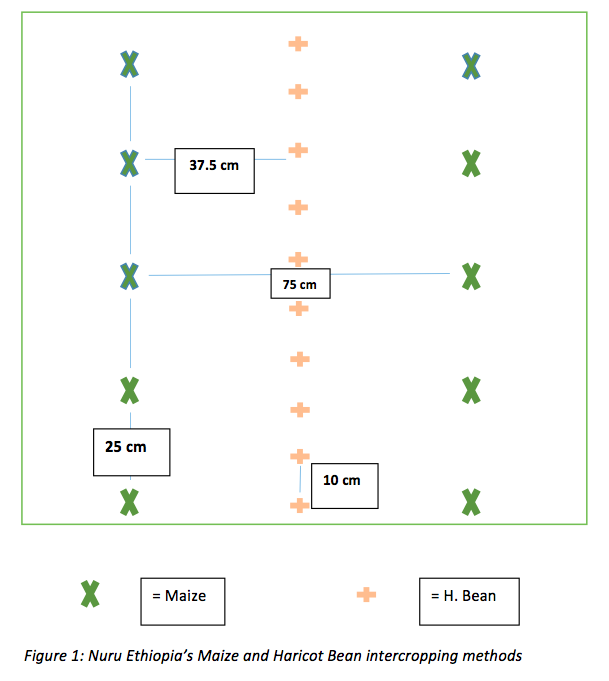 By intercropping maize and haricot beans, Nuru Ethiopia will increase the yields of maize and haricot beans, maximize the use of arable land, increase the sustainability of agronomic practices in the communities we are working with, and promote diversification. Most small-holder farmers are reluctant  to intercrop as a result of negative perspectives advocated by agencies within the historical context of the promotion of intensive monoculture, but the Agriculture Program will use our trainings and demonstration sites as an opportunity to demonstrate how intercropping maize and haricot beans is both a good economic as well as environmentally sustainable choice.