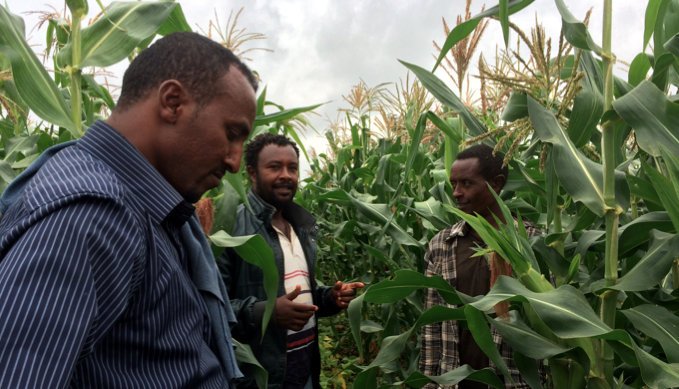 Impact and Optimism: The Story of One Nuru Ethiopia Farmer During the 2014 Belg Season

In 2013, Ermias Gona Waja harvested four bags of maize and one bag of beans from his half-hectare plot in the village of Dubana Bullo. His beans barely sustained him and his family through the hunger season, and his maize brought him no surplus and no profits. He was living hand-to-mouth, unable to even imagine what he would do if an economic shock hit his family. He was living in extreme poverty with no opportunities to escape the cycle of suffering –he had no meaningful choices.

When Ermias joined the Dubana Bullo Grain Marketing Cooperative (founded with seed capital from Nuru), he was skeptical about the new agronomic practices that Nuru Ethiopia was promoting. Throughout his life, he had been told that intercropping maize and beans was a “backwards” and “primitive” behavior that only the poorest farmers engaged in.

“I was really worried about taking a loan from my cooperative and planting using these new methods. The spacing of the maize and beans seemed very close, and the labor it took to plant a half hectare using this method was much higher than during my previous years as a farmer.”

But in June of this year, Ermias began seeing his beans ripening – their deep green leaves turning a pale yellow. He noticed the pods transitioning from green to gray and falling to the earth. After a bean harvesting training, Ermias walked between his rows of maize and pulled his beans out of the ground, putting the pods into sacks and leaving the plant residues on the ground.

“I harvested so many beans this year! It has been amazing. I had two sacks of beans for my house and was able to sell three more at the local market. We are still eating the beans and will still have more during our maize harvest. I even put a sack aside to use as seed next year. I used some of that money to pay back my loan with the cooperative, and some of it to buy new clothes for my son who is now attending primary school.”

Walking through his farm, Ermias drifted his hands through the towering leaves that emanated from the stalks. Each stalk flaunted three dense cobs of maize that were quickly ripening. With a smile on his face Ermias looked up and down his neatly spaced rows that were still soaking in nitrogen from the bean residues.

“I have never in my life had a maize farm like this. When walking through these rows, I don’t see a single thin or stunted stalk. I am very sure that this year I will get more than 10 bags of maize from this half-hectare of land. My only wish now is that I had more land!”

While land scarcity might not be an issue that Nuru Ethiopia can address, the issue of yields, management, and food security is. Ermias walked me over to a small plot of land where he was multiplying orange-fleshed varieties of sweet potatoes. Next to it, he had a 100 square meter plot of the orange-fleshed varieties of sweet potatoes under production.

“We learned from the Field Officer[1] and Community Animator how to plant these new varieties of sweet potatoes. We learned how to multiply vines so that we can get more than 20 new vines from one vine. We also learned that the vitamin A found in these sweet potatoes will solve many of our health problems and keep our immune systems strong. This project has been a great blessing for us and we look forward to transitioning to this new variety from our previous variety of sweet potatoes.”

Looking into the future, Ermias is very optimistic. “Being a Nuru Ethiopia farmer has changed my family’s life. We see a brighter future ahead and we look forward to being healthy, having economic security, and being able to keep our children in school.”

The implications of this narrative are astounding. If Ermias is seeing this profound transformation on his farm, it speaks to the impact Nuru Ethiopia is having with all 488 households we are working with in Boreda. It speaks to the husbands, wives, and children’s engagement with the fight against hunger – the fight against the foundations of extreme poverty. With continued effort, Ermias and other households will overcome poverty within the next few years and see a myriad of opportunities and choices open to them. As Nuru Ethiopia scales to new villages in 2015, we can anticipate the same story being told by more than one thousand households and being materialized in an improved quality of life for thousands of individuals.