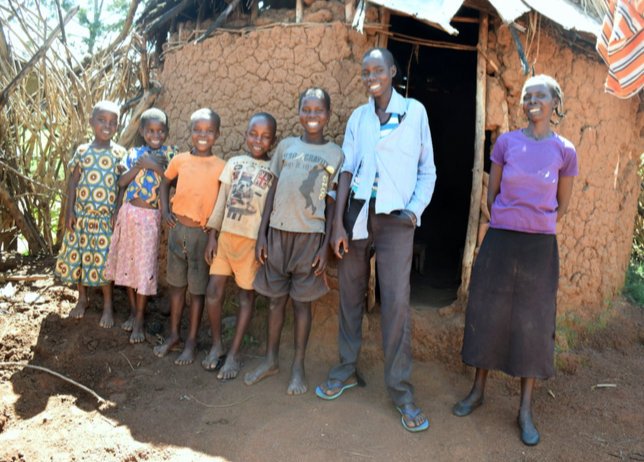 Farmer Breaks the Mold in Kenya

Penina Bunyige Solomon is a Nuru farmer from Nyametaburo village in Kuria West Sub-County of Migori County, Kenya. She is a member of Isibania Farmers Cooperatives Society. She has eight children and has been farming with Nuru since its inception in the year 2008. She is actively involved in the Agriculture Program and has consistently been growing maize, sorghum, and beans.

Penina has managed to educate her children with the income she has made from the surplus yield that she gets every season she farms with Nuru. She is looking forward to harvesting more than fourteen bags of maize this season despite the fall army worm attack. She is among the many farmers who bravely fought the worm through a multifaceted approach involving chemical sprays and mechanical removal once she realized the effect of the sprays was short-lived.

Being a member of a co-operative enabled her to access information about the worm as soon as the attack was reported in the region. Nuru is now able to mobilize farmers more easily since co-operative members are accessible through the mobile platform. Messages were sent to all farmers alerting them of the attack and the means available to counter the attack.

Reports from The Ministry of Agriculture, The Kenya Agricultural and Livestock Research Organization, and other stakeholders indicated that the fall army worm had infested several farms in different parts of the country and posed a threat to food security. The pest spreads rapidly and causes stunted growth in crops. It destroys the developing tassels and kernels thereby reducing grain quality and yield. It has the potential to cause total crop loss if left uncontrolled.

“When we received information about the army worms, we moved with speed to support our farmers. We advised them to mitigate the damages from the fall army worm through monitoring and scouting for early warning signs, applying chemicals, mechanical control, as well as restricting movement of infested materials. I am happy our farmers went out of their way to contain the pest outbreak.

It was not easy previously to rally farmers into action quickly. It is now much easier and faster when they are in co-operatives. We are able to distribute inputs faster and offer extension education and follow-ups much better.

When a challenge occurs, we immediately send out messages to them through the bulk SMS platform and follow up through their co-operative officials who are in their vicinity. Despite the attack, we shall still have a bumper harvest this season. We are already scouting for markets,” explained a happy Sirima Masero, the Field Coordinator for Isibania Farmers’ Cooperative Society.

“I am very happy. I did things differently. I injected new energy into my farm. I have crossed the bridge, entered the homestretch and now I expect excellent results. I believe soon I will be out of extreme poverty and hope I shall never go back there. Mine is a story of ‘I have broken the mold and turned the tables.’

I expect a good harvest this season. More than fourteen bags. There will be enough food for my household. I will pay schools fees for my children with the extra money from the sales. The price of maize is quite good this season. Am grateful Nuru is still with us and that they are supporting our co-operatives. Thank you, Nuru.” added Penina.

Raphael is the Public Relations Officer for Nuru International Kenya. Before joining Nuru in September 2016, he was the Communications Officer for Impact Research and Development Organization since 2013. Earlier, he had worked with Standard Group Media in Nairobi as an Intern Journalist in 2012. He is currently pursuing a MA in Communications and Media Studies at Maseno University in Kisumu Kenya. He has a BA in Linguistics, Media and Communications from Moi University in Eldoret Kenya. He also has a Diploma in Information, Communications and Technology as well as a Certificate in Graphics and Website Design. He is passionate about writing and photojournalism.