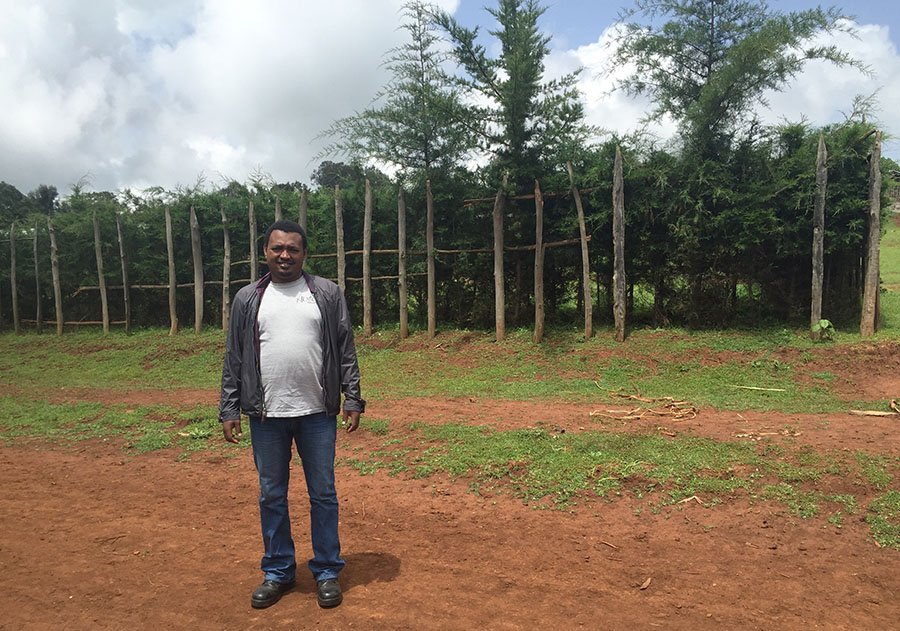 In 2016, Nuru Ethiopia expanded its Agriculture Program to two new kebeles in Kucha, a region north of Boreda where Nuru Ethiopia has been working since 2014. In this interview with Berhanu Gumara, a native of Kucha, he shares about his work as an Agriculture Extension and Rural Livelihoods Field Officer with Nuru Ethiopia.

What did you do before Nuru Ethiopia?

I worked in the government of Kucha for 12 years as an extension expert. I did similar work to Nuru – training community extension workers and farmers to plan and monitor crops.

Why did you join Nuru Ethiopia?

Nuru happened to be the best organization to explore my abilities to help farmers. With Nuru, we reach farmers who are in need. That’s why I joined Nuru. The government is really doing good work with farmers. The government has laid good ground for Nuru. Without them, Nuru could not have achieved this year’s plan to work in Kucha. Nuru has already trained farmers in two kebeles and plans to expand to four more in August.

How is Kucha different from Boreda, where Nuru has been working for the last few years?

Why did farmers in Kucha not practice intercropping before?

If you grow crop varieties together, it is difficult to manage on a large size of land. Instead, farmers traditionally dedicate different plots of land for different crops. Intercropping has been scientifically proven to be better for the soil than monocropping. Intertillage is not scientifically proven to increase harvest. Farmers with limited land may practice intercropping, but they do know or use the scientific method that Nuru teaches. They typically alternate each plant in a row. But with this method, they do not know if they are losing or gaining crops, meaning producing a lesser or greater harvest. Nuru teaches to plant an entire row of each crop – one row of maize, then one row of beans, then the next row of maize and so on.

Why is intercropping an important practice?

Intercropping increases productivity of a crop per area of land. Plus, farmers can harvest beans before they harvest maize, giving them an early food supply before the maize harvest season. Some varieties of beans are runners that suppress the growth of the maize and should not be intercropped with maize. That’s why the inputs Nuru provides are so important. Nuru provides inputs for beans that grow like shrubs which can be intercropped with maize. Farmers really liked the training on intercropping because they can see the benefit, particularly to be free of additional costs of fertilizer and labor while increasing the output from the same size of land. For this reason, farmers in Kucha accepted Nuru’s package and plan.

In your work with Nuru Ethiopia, what is your vision for Kucha?